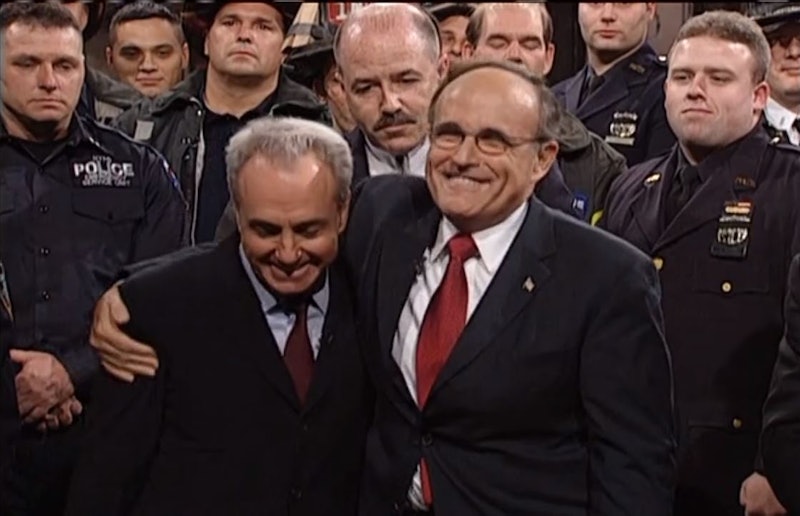 In the 13 years since the terrorist attacks of Sept. 11, entire hordes of human beings have been created. It's strange to think that there are sentient young children today who didn't exist when the Twin Towers fell, or weren't even old enough to remember them. It's a reminder of how much has happened in the years since. But one thing hasn't changed (well, much): Saturday Night Live.

There are few cultural institutions more entwined with the city of New York than Saturday Night Live. But when the terrorist attacks occurred, the show was scheduled to premiere its 27th season in less than three weeks. The entire city was shaken up, including the show's studio. The show's host, Reese Witherspoon, wasn't even sure if she should travel to the city. Witherspoon said at that point, people were wondering if the city would be attacked again, and she was worried about the safety of her daughter. But producer Lorne Michaels convinced her that people needed to laugh, so Witherspoon did the show's opening monologue, saying "I am so happy and honored to be here tonight. We've never done a show under these circumstances so we're still finding our way. But I promise you we're gonna give it everything we've got."

To Michaels, the question was never if the show could come back, but how. How could people laugh again after a tragedy that had affected America so deeply? So Michaels decided to bring Rudy Giuliani on the show, the current mayor, to act as the voice of the city. New York magazine reports:

Mayor Giuliani had done the show several times. And then we had the police chief, the fire chief, and a lot of guys from the Port Authority, none of whom had been away from ground zero. When they came to the studio, there was a thousand-yard stare. You know, they moved among us, but they were still down there ... I had been agonizing about how to open. And I did a joke with the mayor where I ask, “Can we be funny?” And then he says, “Why start now?” Which is for me the ice-breaking moment. He was the voice of the city, and he needed to give us permission.

The skits weren't the most memorable in the show's history, but it seemed that getting through the show was the whole point. And it was the first live show for one of Saturday Night Live's most memorable cast members: Seth Meyers and Amy Poehler. NY Mag reveals Poehler said:

Looking back, the tricky part was in the months to follow. It was hard to do political satire; it was hard to make fun of the president. People were just too sad. All of a sudden you had these new bad guys like Osama bin Laden. And these were bad guys. These weren’t, like, jokey ­Nixon bad guys. So figuring out the comedy in all that was a struggle.

It may not be the best recorded episode of Saturday Night Live, but the show's tribute to 9/11 just weeks after it happened showed the importance of laughter. Laughter not only as catharsis, but as defiance. Laughter to show: you will not break us. We are still here.