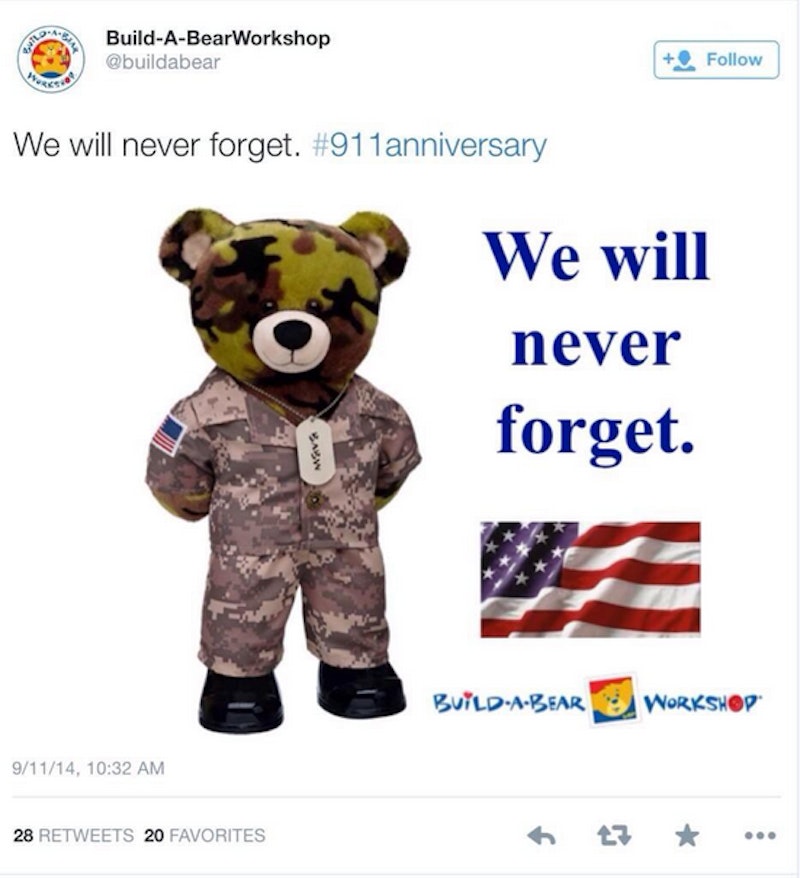 On the 13th anniversary of 9/11, companies want to commemorate the day in their own way. Whether it's inspirational messages or reminders of America's strength, brands are paying tribute to those who lost their lives that day. I wish that was the end of that, but since this is reality, an inevitable few have completely bungled the noble task. Get ready to cringe at the most utterly misguided brand tributes to 9/11.

When you think of those who make 9/11 tributes, you probably think of the New York Fire Department, the mayor's office, throngs of politicians, etc. I'm going to bet that your mind does not immediately go to The Vitamin Shoppe, Bikram yoga studios, or Fleshlight — yes, that Fleshlight. But on Thursday morning, still groggy and downing their first, perhaps second or third cups of coffee, these companies all met in their conference rooms and thought, "Well, we should say something."

And thus we were treated (assaulted?) with a whole host of inappropriate tweets, some taking advantage of the date for a sale, some creeping us out just by associating itself with the day, and some rendering us speechless. A time capsule app featuring a cartoon dinosaur making frivolous remarks about Sept. 11? You'll see what we mean.

This Bikram company is treating the anniversary like it's something to celebrate.

As is this lingerie brand.

While Build-A-Bear capitalized on the day to push a product.

Some pointed out that Build-A-Bear's tweet was actually worse than a sex toy's tribute to 9/11.

To be honest, that is quite a poignant picture.

And then there are the companies who have to literally align their brand with 9/11.

But perhaps the most troubling one of all is this.

Timehop is an app that takes you down memory lane each day by posting a photo that was taken on that very day years ago. Today it shared a photo of an animated 9/11 memorial featuring a dinosaur. The randomized captions underneath are usually pretty trivial, which is fine and all when it's a picture of your pug in a tutu, but not so much when it's describing the anniversary of 9/11.

Some other captions that users received were "This day was more awesome than that time we played Marco Polo in the grocery store" and "All-time best days: birthday, graduation day, day you're rescued from desert island, this day." Ahhhhh.

But maybe we're pulling our hair out in frustration for no reason. This guy responded to all the brand fails quite succinctly.

More like this
Taylor Swift, Kerry Washington & More Speak Out On Uvalde Mass Shooting
By Jake Viswanath
TikTok Is Using A Kendrick Lamar Song To Post Thirst Traps
By Courtney Young
What Does “Gatekeeping” Mean On TikTok? The Viral Term, Explained.
By Courtney Young
TikToker Kate Glavan Has The Antidote To The “Hot Girl Walk”
By Alexis Morillo
Get Even More From Bustle — Sign Up For The Newsletter