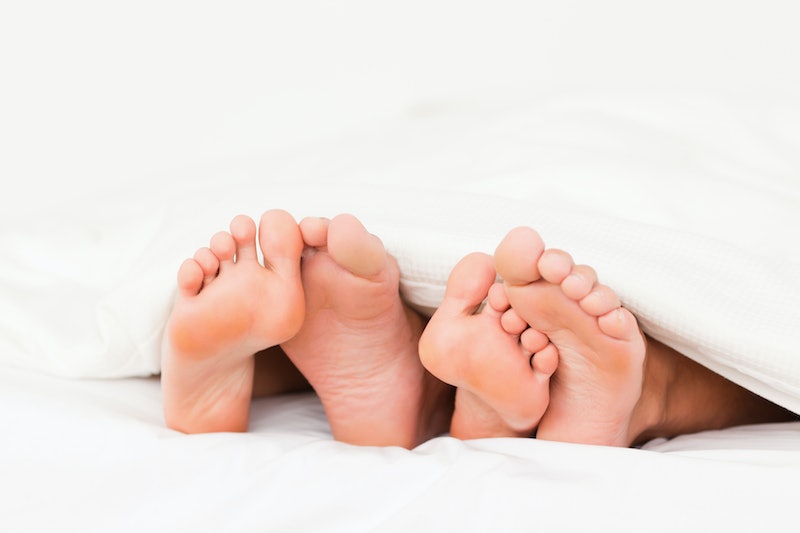 What's worse than getting back pain? Getting back pain during sex. So how on earth do people with bad backs get it on without straining spines — even just a little? Though it was previously believed that "spooning" is the safest sex position for those challenged in the spinal area, new research says that "doggy-style" is best sex position for back pain sufferers — male back pain sufferers, that is.

Yep, according to the Washington Post, a new study conducted at the University of Waterloo in Canada — and published in journal Spine — found that, contrary to popular belief, spooning isn't the best sex position for men suffering from back pain: doggy style is.

So how, exactly did they figure this out? After choosing 10 heterosexual couples (none of whom suffered from back pain) scientists used of reflective markers, or sensors, to observe their spinal angles, how much muscles were working, and how they were affected by orgasms during sex. Waterloo Stories also explains that the research team used "infrared and electromagnetic motion capture systems like those used in the creation of video games," to observe and document how the couples' spines moved during five common sex positions. This was the first study to ever focus on spine "biomechanics" during sex. (Oh, the magic of technology.)

From there, researchers used their findings to create an "atlas," or a set of guidelines for doctors to use when helping their patients. According to Waterloo Stories, the atlas recommends that "flexion-intolerant men," or "those whose back pain is made worse by touching their toes or sitting for long periods of time," trade out spooning sex for doggy-style sex. The atlas also comes with other suggested positions for those suffering from different kinds of back pain.

So....what about the ladies? Though this study focused mainly on men and their spines during sex, researchers plan on tackling women who experience back pain in the next few months.

Considering that 85 percent of Americans have experienced back pain at some point in their lives, it's about time someone found the best way for them do the dirty — you know, without leaving the experience with a hilarious "and that's how we ended up at the ER" story.

More like this
What Mercury Retrograde Spring 2022 Means For Your Sign's Sex Life
By Nina Kahn
Help! My Partner Only Wants Sex Late At Night & Won’t Compromise
By Sophia Benoit
Ask A Sex Therapist: Is My Sex Fantasy Normal?
By Madison Malone Kircher
6 Abortion Advocates To Follow On TikTok
By Sara Youngblood Gregory
Get Even More From Bustle — Sign Up For The Newsletter