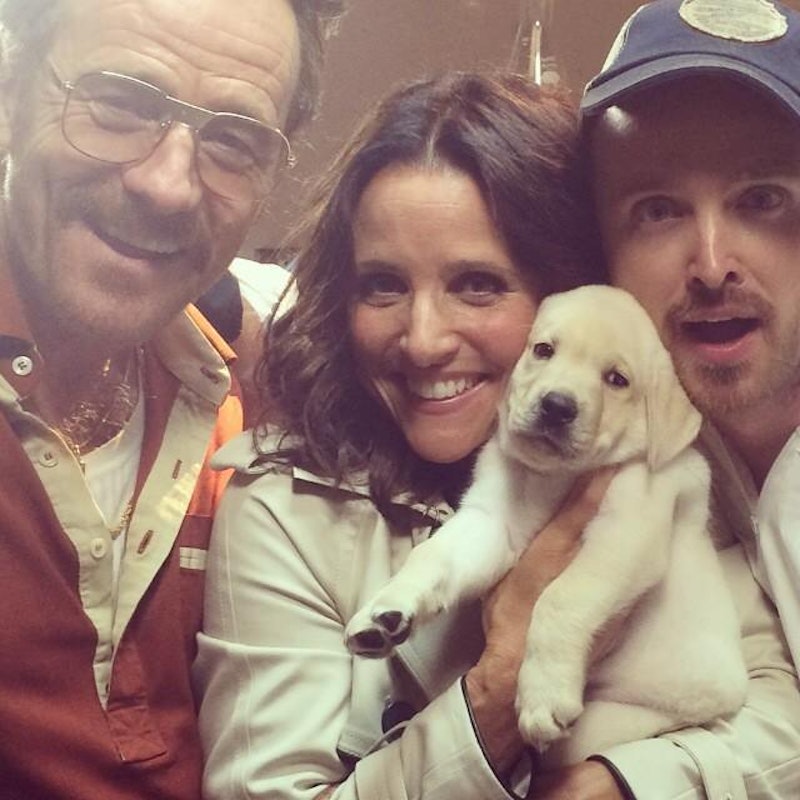 One of the best parts of the recent Emmy Awards that took place in LA last month was undoubtedly the lead-up to it: As part of the promo trail before the Emmy Awards, Julia Louis-Dreyfus, Bryan Cranston, and Aaron Paul all appeared together in Barely Legal Pawn , a sketch that parodied both pawn shop shows and Breaking Bad. It was amazing, needless to say — all three of those actors are great on their own, so of course, put them together and it's amazing times three — and the best part undoubtedly came at the end, when circumstances that I won't spoil (watch it instead!) led to the appearance of puppies. It was a bit of a tense moment in the sketch, but off-set, it looks like the trio made the most of their puppy time: In a throwback post on Twitter, Julia Louis-Dreyfus posted a picture of Bryan Cranston, Aaron Paul, and her all cuddling a puppy on the day of the shoot.

"It's puppy love with @BryanCranston & @aaronpaul_8 #tbt," She simply tweeted, along with the adorable photo. I know that all three of them are busy with their respective awesome careers and stuff, but is it too crazy of me to ask that they all just star in a TV show together that no network ever cancels? Because honestly, I think the entire world would benefit from that.

Check out the picture below. And, if you haven't yet watched Barely Legal Pawn, check that out below as well.