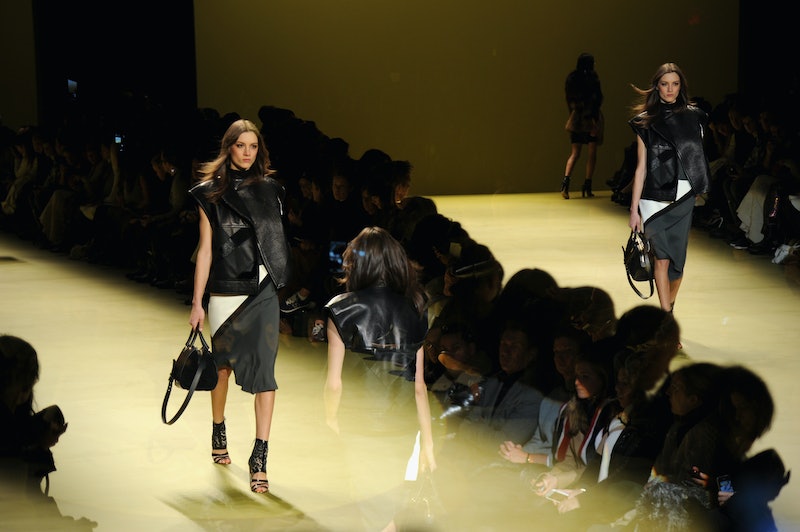 In the never-ending debate regarding how much makeup (if any) one should wear, it appears that J. Mendel designer Gilles Mendel is on the side of bare-faced beauty. For his Spring/Summer 2015 runway, the designer decreed that his models wear nude shades and nearly imperceptible makeup instead of embracing the more vampy look seen at other Fashion Week shows this year. Using Kerastase hair products and Maybelline makeup, the artists backstage did just that, creating low-key looks on each model that suggest an elegant, modern woman-on-the-go who hasn't the time to cake on heavy cosmetics, let alone the inclination.

So how does one create a no-makeup look that won't set photographers screaming from the runway? With a few key products, of course. After strategically dotting concealer in any areas with extra redness including the eyes, mouth, and nose, Maybelline's artists took special care in evening out the skin with a minimal amount of product. Maybelline's Eye Studio Color Tattoo Eyeshadow Metal in Barely Branded was then used as a highlighter at the cupid's bow of the lips, on the brow bone, and across cheekbones. For a barely-there effect on the eyes, artists smudged Master Kajal Waterproof Eyeliner in Midnight Brown into the upper and lower lash line, and followed the liner with a light swipe of Great Lash Mascara. Each model's brows were brushed up with a combination of clear mascara and Baby Lips. Cheeks were lightly kissed with blush, and a dot of Baby Lips on models' pouts completed the look. Hair was likewise pared-down; each model was treated to a low ponytail coated with a veil of Kerastase finishing products for a sleek, glossy effect. For a collection that centered around utilitarian shades of grey, black, and white punctuated with fiery crimson, lime, and electric blue, an understated makeup look was the perfect complement.