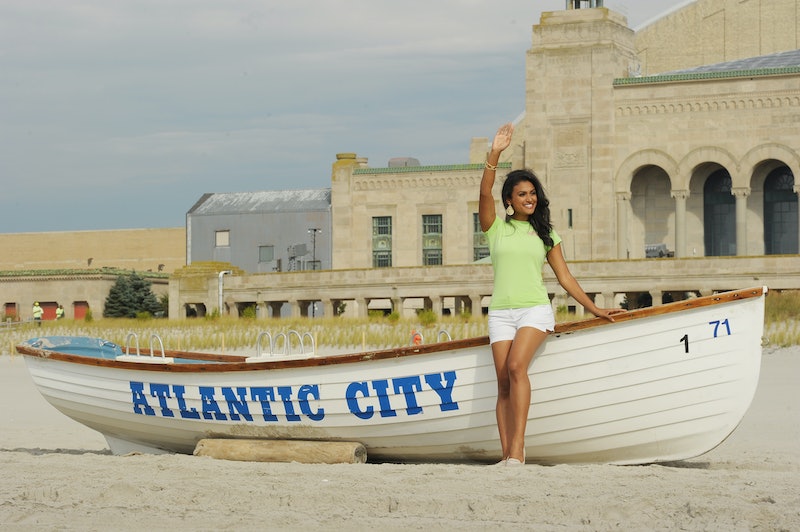 The Miss America pageant is one of those traditions that feels like it’s been around forever. It kind of has: When ABC airs this year’s Miss America competition on September 14, it’ll broadcast the crowning of the 88th winner in the pageant’s history. But just how did this whole thing get started anyway, and more specifically, who started the Miss America pageant?Not to be confused with Miss USA's Donald Trump-backed festivities, the origins of the Miss America pageant are entirely fitting: The whole thing was dreamed up by Atlantic City businessmen to bring crowds to the seaside retreat. PBS reports that, in 1921, The Businessmen's League of Atlantic City went around to neighboring cities all along the East Coast — hardly the entirety of America — and asked cities to hold local beauty contests, saying that if the hometown newspapers paid for the contestants’ wardrobes, they’d pay for travel to Atlantic City to compete in its contest. PBS says results were mixed:

For weeks before the contest, advertisements up and down the East Coast promised a beachfront bathing suit parade of "thousands of the most beautiful girls in the land." In the end, there were only a handful of beauty queens. They were from Washington, D.C., Pittsburgh, Harrisburg, Ocean City, Camden, Newark, New York, and Philadelphia. A cheering crowd of 100,000 gathered on the boardwalk on the morning of September 8th, 1921, hoping to catch a glimpse of the bathing beauties.

The winner, 16-year-old Margaret Gorman, brought the crown home for Washington, DC. She was conflicted about the title, though, and the New York Times reports that she “became the first Miss America in 1921 and spent the better part of the next seven decades trying to live down the bathing beauty image.”

At her death in 1995, the Times noted that Gorman still stood large in Miss America lore:

A petite, blue-eyed beauty whose long blond ringlets made her a Mary Pickford look-alike, Mrs. Cahill was not only the first Miss America, but also set two pageant records that still stand.

At 5 feet 1 inch and 108 pounds, she remains the smallest Miss America, and with a 30-25-32 figure that was close to the flapper era ideal, the slimmest.

Of course, these records are a lot easier to set if you're competing as a 16-year-old.

Still, even with only a few contestants, the event was successful enough to continue and grow throughout the ensuing years. Talent was added in 1935, and the first scholarship was awarded in 1945, and the pageant made its first leap to television in 1954.

Today, the organization is far from the group of businessmen looking to extend the beach tourist season into the fall; the Miss America Organization is actually not-for-profit. (If you’re looking for a flashy businessman to run a beauty pageant, you can hop over to Trump's Miss USA.) Rather than advertising bathing beauties, the Miss America Organization would rather play up its programs to empower and educate women.

It hasn’t strayed that far from its roots, though. The the Miss America Organization is based in Linwood, New Jersey, which is only a little more than 10 miles from Atlantic City.