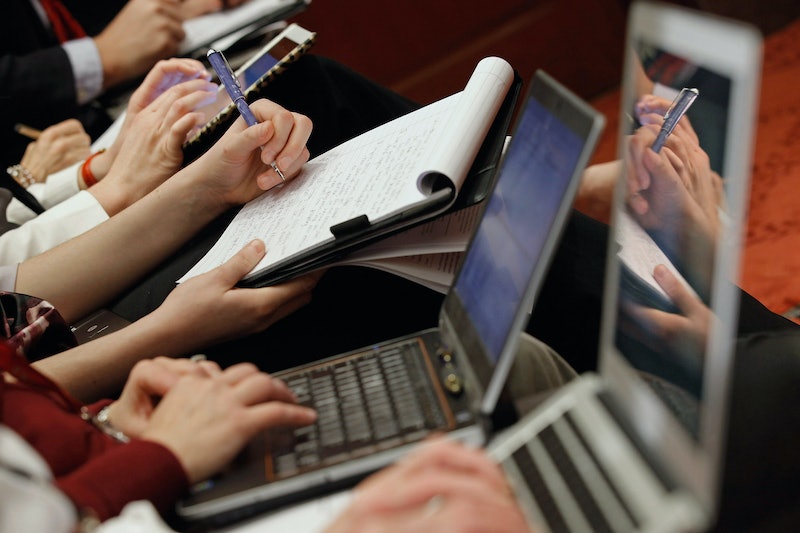 As humans, we already (generally) agree upon the basic right to life, privacy, freedom of speech, and equality. But what about the right to visit BuzzFeed?

On Wednesday morning, Facebook's Mark Zuckerberg declared that "everyone deserves to be connected," and that internet acess should be a human right for the digital age. To that end, Zuckerberg has partnered with tech giants like Nokia, Samsung and MediaTek to attempt to provide internet access to the two-thirds of the world that isn't currently online.

Sure, Zuckerberg's ethical standpoint dovetails nicely with his business — if more of the world is online, then Facebook's power will expand until it can connect every person alive. But is he correct about internet access evolving enough to be considered a human right?

Last year, the U.N. expanded their definition of human rights to extend them online — for example, you have the right to freedom of speech in real life, and the same right applies to what you post on the Internet. When Zuck says that internet connectivity should join the list of human rights, he isn't referring to the right to check out the front page of Reddit. Communities use the internet to organize political protests, publicize news events, and quicken medical treatment — and a large chunk of the GDP of many countries comes straight from the Internet.

The last point might be the most pertinent, and it's certainly the one most heralded by Zuckerberg. The technology industry is the fastest-growing field in the world, and is a huge boost to economies. Without Internet access, countries who have to depend on only their agricultural and engineering industries for economic growth are denied the gateway to what could be, theoretically, a gargantuan monetary boost.

The world's greatest economists and NGOs are busy working on pressing needs in the developing world, like ensuring clean drinking water and fighting widespread poverty. But approaches are changing: President Obama recently even unveiled a plan to inject billions of dollars into providing electric power for Africa, at least for the next five years.

Should most of Africa gain Internet connectivity, it could, theoretically, use the industry to boost its ailing GDP in the same way that Western countries have. When Zuck says that internet access is a human right, he doesn't mean that all people desperately need Facebook; he explains that every part of the world deserves to boost its economy by accessing the technological opportunities inherent to widespread internet access.

But hang on, says The New York Times . We've all got it wrong — it's not that access to the Internet is a basic human right, it's that said access enables existing rights. The Times' editorial put it this way:

There is a high bar for something to be considered a human right. Loosely put, it must be among the things we as humans need in order to lead healthy, meaningful lives, like freedom from torture or freedom of conscience. It is a mistake to place any particular technology in this exalted category, since over time we will end up valuing the wrong things. For example, at one time if you didn’t have a horse it was hard to make a living. But the important right in that case was the right to make a living, not the right to a horse. Today, if I were granted a right to have a horse, I’m not sure where I would put it.

The same editorial distinguishes between human and civil rights. So, as a human, I shouldn't have the inherent right to pull up a computer and log onto the internet. However, a country should grant me the access to a community that allows me to engage in a global conversation and provide me with facts in real-time.

Countries like China, Syria, and North Korea have banned websites like Facebook because their existing governments don't want citizens to have the ability to organize protests, disseminate information that might incite distrust of the government, or be able compare their lack of freedoms to that of other global citizens.

The NYT is right to point out that we don't need the web to survive and flourish as humans. Yet, in an age in which the Internet is a unique tool to practice and maintain rights that some people are barred from, it's important to not underestimate the possible impact of global internet connectivity.