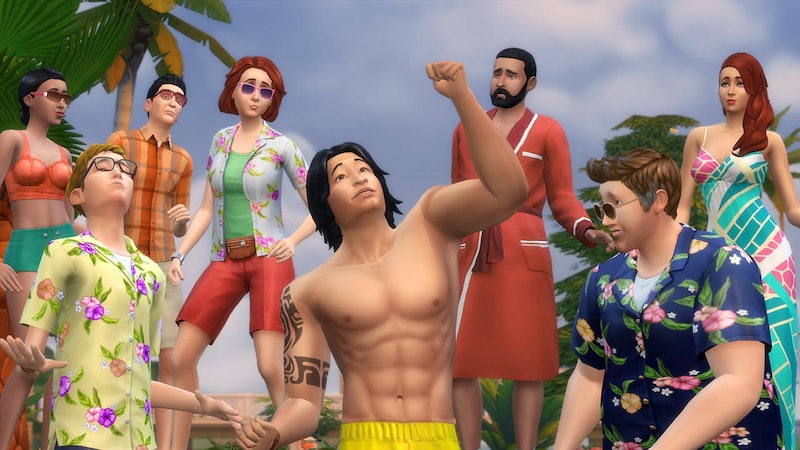 Debuting Sept. 2, the long-awaited The Sims 4 promised an array of new features: expanded personality traits, enhanced architectural tools, and super-detailed character customization (and, for reasons known only to EA Maxis, a complete lack of pools. Also, toddlers). So, here's my question: is The Sims 4 everything I'd hoped for?

To find the answer, I revisited the year 2000, when my imagination took flight at the tender age of 12 with the very first iteration of The Sims. I vividly remember spending hours (OK, days) creating Sims that looked just like my middle school crush and me. I would build a mansion for us to live in, and we'd marry and kiss until we had a baby.

The Sims wasn't just a PC game — it was a way to live out my future through simulated, babbling characters. Life was great in my little alternate universe, especially with the introduction of expansion packs. They not only introduced endless possibilities with pets, vacations and magical wizards (!), but new tools for building and new items for purchasing. When I thought The Sims couldn’t get any better, I was fooled with the release of The Sims 2 — and fooled once more in 2009 with the release of The Sims 3.

Since expectations had been exceeded, one after another, The Sims 4 was sure to be supercalifragilisticexpialidocious. However, after a ton of anticipation for its arrival, EA Games missed the mark… by a long way.

Before I started to play the game, I had to create a family and build a house. Entering the game, what first struck me was: Simplicity. (Geddit?) In The Sims 4, customizing Sims is better than ever — it takes just a click and drag of the ears to look like Alfalfa, or a nose that looks like Danny Tanner. Building my simulated character was a breeze, and I quickly created my Sim family and moved into the neighborhood. After picking a "lot" and laying down my foundation, I thought: Hey, this is really, really easy.

The Sims 4 continued to make my life a breeze with its new architectural tools. Four-walled rooms can be built with one click, and houses can be lifted from one area to the next. In addition, fully furnished and decorated rooms can be bought if you'd rather get right down to business.

Unfortunately, the game went downhill from there.

Soon, I realized there were absolutely no tools to build a swimming pool. Granted, the swimming pool was mainly built as a death trap... but I still wanted one. Another item missing was the hot tub. A very upsetting discovery, but I decided to truck on.

So. In The Sims 3, Sims could have children and raise them from birth to toddler to child to teen. There were actually seven life stages in The Sims 3. The Sims 4, however, simplified these stages to six, getting rid of the most vital life stage — the toddler stage.

When I played The Sims 3, I liked not doting over my toddlers. I never taught them how to walk, talk, or use the potty. (Don't judge.) Thanks to this complete and utter neglect, the game would pick my toddler’s character traits when he or she grew into a child. In my opinion, this made it all the more fun — not knowing how your Sim-kid would turn out.

Unfortunately, creators of the game kicked it old-school and reverted back to the original Sims, when babies showed up in bassinets and turned into full-grown children in a matter of days. Also, the babies don’t seem to be as cute as I remember.

Not only were pools and babies missing, a whole slew of staple Sims items weren't available in The Sims 3. Just to name a few — no basements, no cars, no cribs, highchairs, potty training seats. And, most importantly, no excitement.

This game proved lackluster. In a statement before the game's release, EA Games had this to say:

The fact is, we owe you a clearer explanation for why pools and toddlers will not be in The Sims 4 at launch, so here goes. It begins with new technology and systems that we built for this new base game for The Sims – a new AI system, new animation system, new audio positioning tools, new locomotion logic, new routing intelligence and much more are all entirely new in this game. The vision for The Sims 4 is a new experience that brings your Sims to life in deeper and uniquely personal ways – through emotions, personality traits, behaviors and interactions. To do that, our technology base needed a major upgrade.

So the bottom line is that when we sat down and looked at everything we wanted to do for this game, all the new tech we wanted to build into it, the fact was that there would be trade-offs, and these would disappoint some of our fans.

Who knows, expansion packs may appear with some of the lost items — but my opinion? Don't waste your money. The game had a couple new features to enjoy, but it lacked in evolution. I am genuinely disappointed to say that my decade-long journey with The Sims franchise will end with The Sims 4. It gets two out of five stars from me.