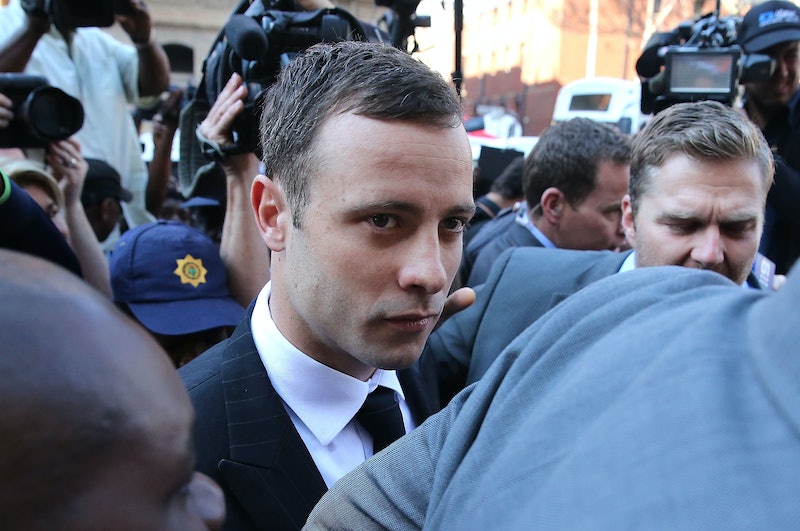 The dramatic five-month trial may be over, but Oscar Pistorius' future remains unclear. Now that the Olympic runner has been found guilty of culpable homicide in the shooting of his girlfriend Reeva Steenkamp, he could face a few possible sentences. So when will his fate finally be decided? Judge Thokozile Masipa will sentence Pistorius on Oct. 13, and has granted him a bail extension so that he can continue living with his family until then.

Judge Masipa read Pistorius his final verdict on Friday, finding him guilty of one count of culpable homicide (equal to manslaughter in the U.S.) and one count of discharging a firearm in public, stemming from a January incident at Tashas restaurant in Johannesburg. She stated in court:

I am of the view that the accused acted too hastily and used excessive force. It is clear that his conduct was negligent.

Pistorius has dodged most of the charges in the case, including the most serious one of premeditated murder. Judge Masipa ruled that the state was unable to prove beyond reasonable doubt that Pistorius intended to kill Steenkamp. Other charges that Judge Masipa dropped include one count of discharging a firearm in public and illegal possession of ammunition, the latter of which carries a possible 15-year sentence.

Another thing Pistorius was able to avoid was detainment. On Friday, the defense team successfully applied to extend the defendant's bail so that he could continue to live with his aunt and uncle, Lois and Arnold Pistorius.

The worst may be behind him, but Pistorius still faces a very uncertain future, which could play out in several different ways on Oct. 13.

Pistorius has been able to avoid some pretty serious charges thus far, but his luck may very well run out. Judge Masipa may decide that the "Blade Runner" deserves the maximum 15-year sentence that culpable homicide carries, perhaps because of the "excessive force" or because he had not acted "reasonably" by calling the police or yelling for help before firing his gun.

Best-Case Scenario: No Jail Time at All

On the other hand, Judge Masipa could take into consideration mitigating factors like his emotional instability, anxiety, and disability and hand him the most lenient punishment possible for culpable homicide, which is a suspended sentence.

Suspended sentences are an alternative to imprisonment and are usually granted to first-time offenders or cases involving less-serious crimes. If Pistorius is handed a suspended sentence, he could enter a probation period, at the end of which the judge dismisses his sentence altogether — if he does not break the law again. This scenario would even give Pistorius the opportunity to revive his athletic career.

Pistorius could also receive a more likely five-year sentence with the possibility of parole after three years for good behavior. His prison sentence could also be converted to house arrest with conditions such as no alcohol use. Judge Masipa could also impose a fine on the Blade Runner.

More like this
UK Viewers Will Have To Wait To See Jessica Biel’s Killer Housewife Series
By Rachel Mantock
Justin Timberlake’s ‘Candy’ Character Really Investigated Betty Gore’s Killing
By Brad Witter
IRL ‘Staircase’ Characters Todd & Clay Peterson Still Think Their Dad Is Innocent
By Gretchen Smail and Rebecca Patton
How To Fight For Reproductive Rights, Based On How Much Time You Have
By Courtney Young
Get Even More From Bustle — Sign Up For The Newsletter