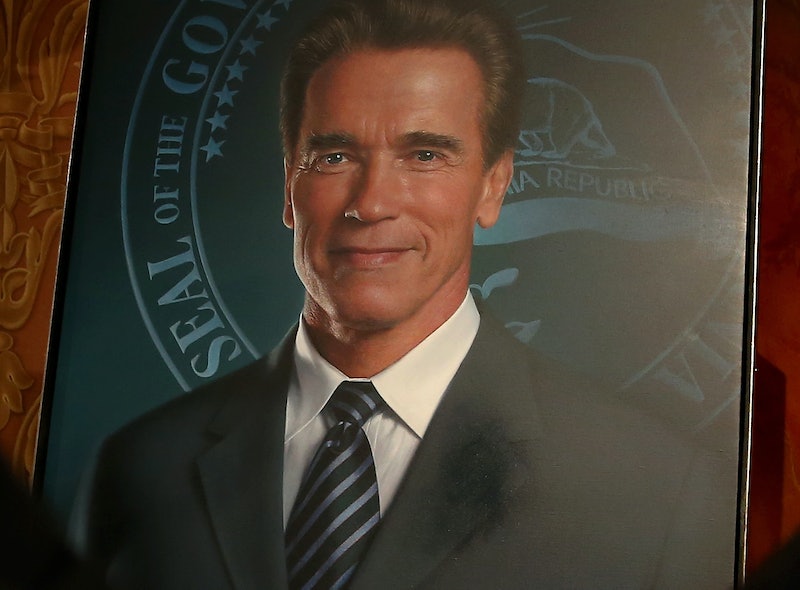 Nothing lasts forever, eh, Arnold Schwarzenegger? He separated from his wife Maria Shriver in 2011, and now he's moving on in classic, revisionist-history style: Shriver was removed from Schwarzenegger's governor portrait, which was released Monday. The portrait was modeled in 2003, and at the time, the incoming governor wore a lapel pin with an image of Shriver over his left breast, but now, she's nowhere to be found.

Whoever was handed the task of doctoring the portrait, however, did a pretty shabby job with it. I have no idea what goes into altering an oil painting after the fact, and it sounds pretty difficult, but surely for a portrait that's going to hang in the California capitol building, a better job could've been done. The spot on Schwarzenegger's suit where the pin used to be now has an extremely noticeable, darkened blotch on it, plain for all to see.

Obviously, not everyone is going to know about the portrait's history, either, so it figures that many visitors to the capitol will see it and think "Huh, that sucks."

Whoever touched it up did not do a very good job. It was softball sized, right there on his left lapel.

It's kind of like cropping an ex out of some old Facebook photos you still want to salvage, although obviously the stakes are higher, and a simple snipping of a photo frame is quicker, easier, and more discreet than this.

And the hasty cover-up job on Schwarzenegger's portrait may be drawing eyeballs for a long time — unless of course somebody is brought in with a better eye for detail.

Shriver and Schwarzenegger broke up in 2011, amid reports that the former governor had fathered a child with the couple's housemaid. In an interview with 60 Minutes in 2012, Schwarzenegger acknowledged that the affair was stupid, and reflected on the pain he'd cause his family.

I think it was the stupidest thing I've done in the whole relationship. It was terrible. I inflicted tremendous pain on Maria and unbelievable pain on the kids.

He also speculated that Shriver was probably still "wishing me well in everything I do," but it seems like things aren't as relatively harmonious as all that anymore — if you gave me the choice between having an ex in that portrait, or having a big, dark blotch instead, I'd think it best to defer to history and leave her in.