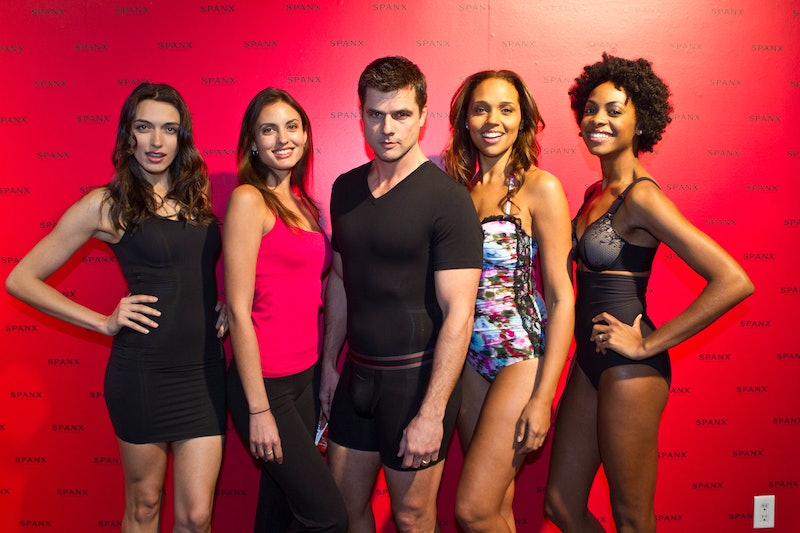 If you’ve ever wondered whether there’s a male equivalent to female shapewear, guess what? There is. The image below is currently making the rounds, so let’s take a minute to examine it, shall we? Called the “men’s answer to the push-up bra,” it shows a man (notably with his head chopped off, thus protecting his identity) wearing a breastplate — just not the cool arms and armor kind. I’m not entirely sure what it’s made of, but its overall effect is to make a less-than-toned torso appear to be full of incredible abs and pecs when worn underneath a T-shirt.

Yes, it is ridiculous. But that aside, what are we meant to make of it?

On the one hand, I actually think it’s kind of funny. Sometimes, dumb humor inspires more laughter than the cleverest of jokes, and on a Friday afternoon? Let’s just say I’m easily amused. On the other, I think it oversimplifies the issue a little too much to be entirely accurate.

Although the image describes itself as the men’s answer to the push-up bra, it’s probably more accurately describe as the men’s answer to Spanx. When you strip a bra, push-up or otherwise, down to its bare (under)wire, it’s ultimately meant to be functional: It supports your boobs so they don’t turn into sakcs of pain attached to your chest when you do things like run and go up and down stairs. Not that you have to wear a bra if you don’t want to — power to bralessness, if that’s your thing! — but you get what I mean. Spanx, however, don’t really serve a practical purpose. All they do is squash your body into a shape society deems desirable, which — when you stop to think about it — is actually pretty weird. So, too, is the case with this wacky “push-up bra for men”: It performs no practical function, existing solely to present the illusion of a body shape society calls “sexy.”

The image seems to have originated on 9GAG (with “originate” being something of a loose term, given the content ownership controversy in which the site got embroiled a few years back), so do with that what you will — but you want to know the really crazy thing? Something like it actually exists. It’s called the Funkybod undershirt, and it does exactly what you think it does: It molds “man-boobs” into pecs. How effed up is that?

Since we’re a women’s website, we talk a lot on Bustle about the unrealistic beauty standards foisted upon women and what we can do about dispelling them. But it’s always worth remembering that men suffer from similar issues — something of which this weird 9GAG image and its real-life analog serve as reminders. As Callie Beusman wrote on Jezebel when she covered Funkybody in 2013, “The pressure men feel to match their appearance to some nearly-unachievable standard is obviously less potent and less oppressive than the pressure women feel, but it's far from nonexistent.”

Can we all just agree to stop holding each other to unattainable beauty standards? It’s not making anyone happy. All bodies are awesome, no matter what size or shape they are. I vote we celebrate them instead of trying to change them. Who’s with me?