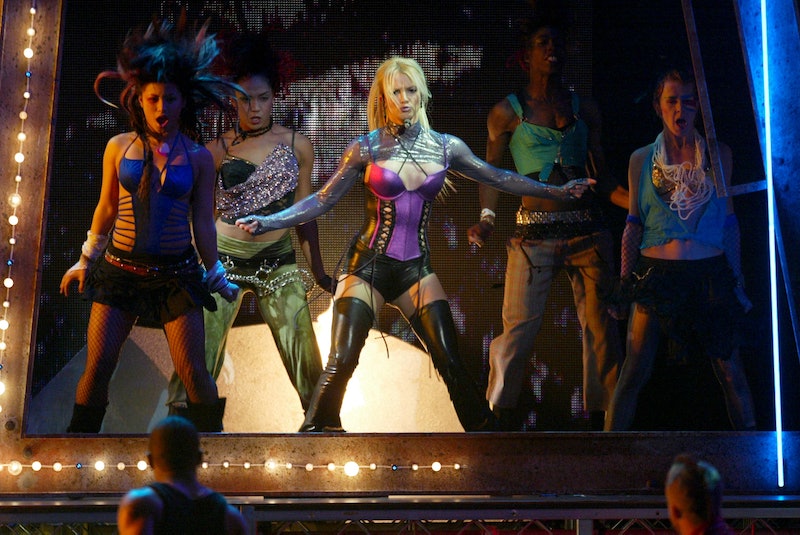 When Britney Jean Spears is in top form, her award show performance game is like an inextinguishable fire. It is hot, it is captivating, and it. Can't. Be. Snuffed. Out. Yeah, she dabbles in the ancient art of lip-synching, but whatever. You don't go to a Britney concert to be knocked on your ass by her voice. A Britney performance is about the elaborate sets, the choreography, the costumes, the catchy hits, and the general pop iconosity. It’s a spectacle in the best possible way. If spectacle is not your thing, it’s not your thing. No shame. But it is most certainly my thing.

I’m never not in the mood to watch her legendary VMA appearances: "Baby One More Time"/Tearin' Up My Heart"? Put it in my eyes this instant. ("Over heeeeere! Over here! No. Here.") The "Satisfaction"/“Oops! …I Did It Again” costume change? Still gives me chills. The “Slave 4 U” snake? No words. The Madonna smooch? Amazeballs. (On the other side of the coin, there was the “Gimme More” “comeback.” Sigh.)

The aforementioned showstoppers are on another level, BUT! There are some non-VMA Britney Spears award show moments that belong in the Britney Award Show Performance canon, too. And yes, we are going to revisit those non-VMA performances right now.

Reason For Decision: Those pants and that choreo are the HEAT, but the set is too minimalistic.

RFD: The spooky backdrop works for and against this one. I can't stop staring at those old timey pictures. So amazing, so creepy.

RFD: When Rihanna and Britney man their stations and grind opposite one another, my pop music-fueled soul does 17 backflips.

RFD: Not only does she break into choreography in the middle of the song, but she does so while wearing jeans!

RFD: Oh, just KILLIN' the iconic choreo from the music video in front of the Bellagio. NBD.

RFD: I cannot stop wailing. This is so beautiful. I <3 Godney Spears.