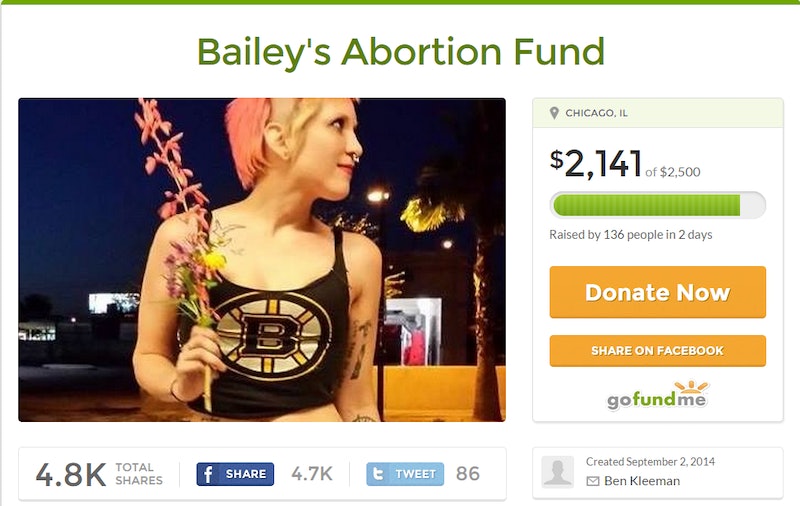 Another day, another controversy over crowd-funding website GoFundMe. You may remember the uproar generated when GoFundMe allowed fund-raising for Ferguson police officer Darren Wilson, the man who fatally shot teenager Mike Brown, via their service. Well, now the other shoe has dropped, and it isn't pretty — GoFundMe deleted a page fund-raising for a woman's abortion, arguing it was slated for shutdown after frequent complaints. So in short, cop kills unarmed man, fire up that GoFundMe. But looking to terminate a pregnancy? Hold on, that's a little too edgy.

The news has caused a torrent of criticism directed at the site, whose stated reasons for pulling down the page aren't terribly transparent. According to the Daily Dot, 23-year-old Bailey received an email saying the page had been shut down because her campaign was "not appropriate" for the site, and that it contained content which the company would "rather not be associated with."

But as is pretty clear just by typing the word "abortion" into GoFundMe's search bar, they're not eager to avoid the issue altogether — to the contrary, they're perfectly happy to allow fund-raising for anti-abortion causes and movements. As you might guess, a great number of people aren't too happy about this.

According to GoFundMe's email to Bailey, they reserve the right to cancel any pages for any reason, and review campaigns that draw a high amount of complaints on a "case-by-case" basis. Which is entirely within their rights to do, of course, but the bizarre contrast in standards this latest case highlights have put it into severe doubt just what is and isn't okay with them.

Soliciting money for an abortion is obviously a no-no, in spite of the fact that abortion is legal in the United States and a constitutionally protected right, however little Republican-run states these days like it.

But what of Darren Wilson? He killed Mike Brown under circumstances that any fair-minded individual would have to call shady, at the very least. But even setting aside whether the direst allegations made by eyewitnesses against Wilson are found true (as Vox detailed, two people have corroborated the claim that Brown was shot with his hands up) he was, at bare minimum, raking in thousands as a result of the killing. And whatever legal standard you can defend GoFundMe's decision to leave the page up — he hasn't been convicted, or even arrested — should surely apply to Bailey's campaign as well.

She isn't even accused of a crime, nor being investigated for one, nor is she planning to commit one. That bears repeating: Abortion is not a crime. Furthermore, she told VICE that her pregnancy has been anything but routine.

Sometimes the pain is so bad that I can’t get out of bed, and I can’t go to the bathroom. When I cough, it feels like my organs being shredded inside of me.

For what it's worth, Bailey was at the very least given the money her page raised prior to its shutting down, and a source told the Daily Dot on condition of anonymity that she'll be having the procedure. But at this point, it seems like you shouldn't expect her model to work in the future — if they're being consistent, this'll happen if any other women seek funding for abortion services as well. If you're looking to support women's reproductive rights, you could always take up the Taco and Beer Challenge instead.

More like this
Michigan’s Governor Is “Going To Fight Like Hell” To Protect Abortion Access
By Andrea Zelinski
How To Fight For Reproductive Rights, Based On How Much Time You Have
By Courtney Young
Plan C Vs. Plan B: What's The Difference?
By Lexi Inks
Harry Styles Called For "Backlash" In Powerful Statement On Abortion Rights
By El Hunt
Get Even More From Bustle — Sign Up For The Newsletter