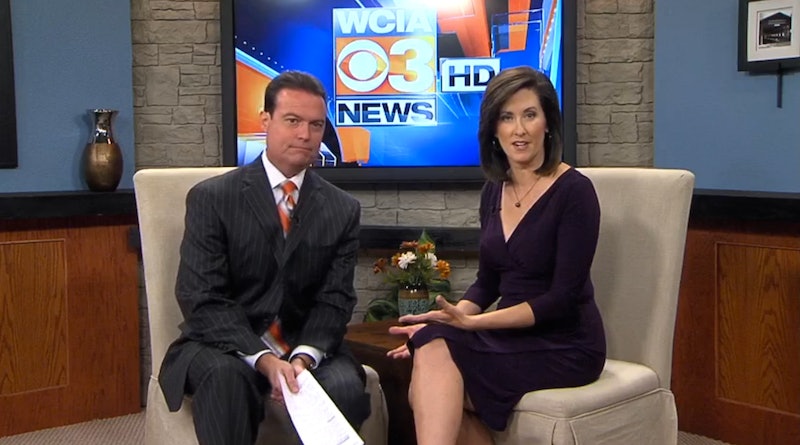 One of the few things that's an assured common bond between all humans beings is also one of the most frightening: the knowledge that we're all going to die someday. That's why what happened on a local news station in Illinois Thursday is so surprising and evocative: WCIA news anchor Dave Benton revealed he has terminal brain cancer and is facing only a few months left to live. But in spite of the fear and tragedy that the diagnosis brings, he's facing it with a calm, open demeanor — he told his audience that he's "at peace" while breaking the news, and it's a heartbreaking and inspirational sight.

The news of Benton's illness itself wasn't a surprise to local viewers in Champaign — he's been publicly suffering from cancer for a while and has been open about the process. As BuzzFeed observes, he tweeted a pre-broadcast photo of his own thinning hairline back in January, and let his followers know that he has halfway to the finish line for his chemotherapy. In February, he wrapped up the radiation treatments, but in the intervening months his cancer came back even worse than before — too large to be removed or irradiated further, and likely to kill him within a few months.

Basically, my cancer is back and it's too big for surgery and radiation, and doctors have told me that I may have four to six months to live. Now, I've also decided to try a new treatment, it's an antibody treatment, a chemo treatment to slow down its growth. The goal here is to have a few more days, and to make them the best that they can be in the life that I have. As you know I am a born-again Christian, I believe that I am in God's hands, I am at peace, and I know that he's going to take care of the days ahead. And that the goal here is to have the best ones possible.

Benton has received an outpouring of support since making the announcement, which is understandable — the American Cancer Society's annual report estimated that over 500,000 Americans will die of cancer in 2014, out of over 1.5 million new cases diagnosed. Cancer ranks as the second-leading cause of death among Americans, trailing only heart disease. In short, it's one of those diagnoses that almost everyone has been affected by at one time or another, whether for oneself or a loved one.

A brief glance at Benton's Twitter makes it clear that he doesn't plan to fixate on his condition with his last few months, however. By and large, it's business as usual, with tweets alerting viewers to the various stories his station is covering. And if that's how Benton wants to devote his energies — continuing to do what he knows best, until he absolutely can't anymore — more power to him. There's something to be said for being able to leave on your own terms, and he seems determined to do just that.

More like this
How The City Healed Five Years On From The Manchester Arena Attack
By Ella Glover
Bustle Newsletter: May 25, 2022
By Stephanie Talmadge
Mandy Moore On The Out-There Wellness Treatment She's Obsessed With
By Rachel Lapidos
Zosia Mamet Opens Up About Her Eating Disorder
By Zosia Mamet
Get Even More From Bustle — Sign Up For The Newsletter