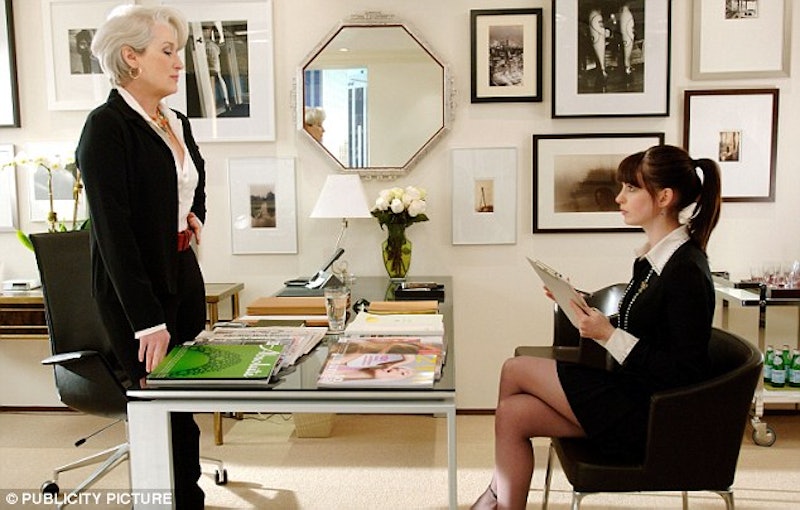 "If you love what you do, you never have to work a day in your life." So the saying goes. But what about if you don't care, dislike, or straight-up loathe your employment situation? What if every day is a struggle to get out of bed and face whatever it is that makes your job barely tolerable — obnoxious co-workers, inept bosses, rude customers, mind-numbing dullness? What if you just want to find whomever said that quote and punch him in the face?

Considering the increasing rate of underemployment in the U.S., there's a good chance you might feel that way. Generation X and Millennials were told to seek our "dream jobs," but in this day and age, we often feel lucky just to have a job. Of course, that doesn't mean we have to be super-pumped about it 24/7.

So what to do when you've used up all of your best excuses for why you can't come in to work, and are seriously considering calling in dead? Do what we devoted bibliophiles always do and seek comfort in the warm, papery embrace of a book. Whether they're true tales of terrible jobs, or fictional accounts that feel a little too real, it's reassuring to remind ourselves that it could be worse, before we say, "Take this job and shove it!"

Why it sucks more than your job: Miranda Priestly, the "devil" in question, is the quintessential boss from hell: rude, demanding, sadistic. The commands she gives her assistants range from the ludicrous (newspapers arranged in a very specific order on her desk each morning upon her arrival) to the downright impossible (get copies of the newest Harry Potter book sent overseas before it's officially released). What makes The Devil Wears Prada even scarier is that it was famously inspired by Weisberger's real-life stint as an assistant to Vogue editor-in-chief Anna "Nuclear" Wintour. After reading this 2003 novel, you'll gladly remember to celebrate Boss's Day, just so long as s/he continues to reward your accomplishments with a "Thank you" and not a "That's all."

2. A Dirty Job by Christopher Moore

Why it sucks more than your job: Mike Rowe may have spent nine years tackling the nastiest of nasty jobs around the country, but there's one occupation he never touched: Death itself. Sure, maybe it's because we can't prove it's a job that actually exists, but if it did, it would suck. Not only does Death Merchant Charlie Asher have to acquire and ferry souls from the deceased to the living, he has to contend with vicious mythological goddesses, a preternaturally powerful daughter, and saving San Francisco from total destruction. And he didn't even sign up for this. Suddenly, Mondays don't seem so bad.

Why it sucks more than your job: Crappy tips, boorish customer behavior, demented kitchen staff — there's a lot to loathe about working in a restaurant, and Dublanica captures it all in his 2008 book inspired by his website. Dublanica's extensive serving experience may have given him all the material he needed to become a bestselling author, but for the rest of us, it just makes us glad we left our serving days behind in college.

Why it sucks more than your job: Does your job make you hate your life so much you regularly have to gather in warehouse basements to pound the living crud out of somebody to make yourself feel better? Well, maybe. Whether that's something you actually partake in, or just daydream about, you have Palahniuk's 1996 novel to thank. The stress of his job as a product recall specialist is enough to send Fight Club's Narrator down an increasingly crazy spiral of insomnia, hallucinations and destructive behavior. Hasn't this guy ever heard of Happy Hour?

5. The Old Man and the Sea by Ernest Hemingway

Why it sucks more than your job: You know those days when, no matter how hard you try, you can't accomplish anything you set out to do at work? Imagine having one of those days for 12 weeks straight. Then imagine you've finally broken through your wall of ineffectiveness, only to have your accomplishment stolen away from you by a bunch of freaking sharks, and almost dying of injury and starvation in the process. Santiago, the hero of Hemingway's 1952 novel, manages to accept his defeat gracefully; our reaction might be a little different.

6. The Firm by John Grisham

Why it sucks more than your job: Employees often think their employers are evil; in the case of Mitch McDeere, the protagonist of Grisham's 1991 legal thriller, it's true. Fresh out of law school and excited about his first real job at the law firm of Bendini, Lambert & Locke, McDeere quickly becomes embroiled in murderous plots and FBI investigations that threaten his and his wife's lives. Compared to that, the bar exam looks a cakewalk.

7. Thank You for Smoking by Christopher Buckley

Why it sucks more than your job: Even if you feel like your job is not contributing anything to the greater good, at least you can take comfort in the fact that it's not actively harming anyone. Nick Naylor, the tobacco industry lobbyist in Buckley's 1994 satire, is not afforded such luxuries. Nick gladly shills for a deadly product, but draws the line at getting kidnapped, nearly OD'ing on nicotine patches, and being framed for the crime. Hey, everybody has to have their limits.