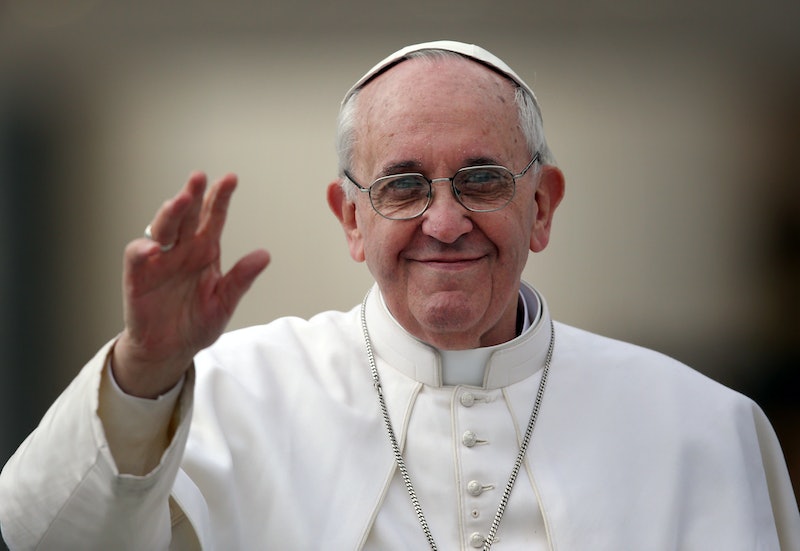 "I believe people ought to mate for life, like pigeons — or Catholics," Woody Allen quipped in Manhattan. That joke was not at all far from the truth: The Catholic Church is against divorce, remarrying, cohabitation and, of course, sex outside of marriage. But Pope Francis seems to be bucking tradition — and making good on his promise of facilitating a more inclusive church. In the first wedding ceremony of his papacy, Pope Francis married several cohabiting couples, some of whom already have children. Welcome to the 21st century, Catholic Church.

The pontiff married 20 couples from the Diocese of Rome at St. Peter's Basilica on Sunday. Several of the couples were reportedly already living together — essentially living in sin, to Catholic grandmas everywhere — prior to their marriage. Some also had children, including one bride that had a child from a previous relationship and was marrying a man who had his first marriage annulled. The Diocese of Rome said the couples ranged in age, from their mid-20s to 50s.

During his homily, Francis emphasized that marriage was not fiction, but filled with real-life hardships, including weakness, discouragement, and infidelity. The pontiff said he believed couples could overcome these hardships with love:

While the wedding may seem innocuous, it's a bold move from Francis. The Catholic Church not only views sex outside of marriage as a sin, but it also disapproves of cohabiting couples. Priests and bishops urge engaged Catholic couples who are living together to separate before marriage, and some priests may even chose not to marry a couple who has been cohabiting.

The Catholic Church also views divorce as a grave offense, and divorced Catholics who begin dating or remarry can't receive Communion. There are also priests in local parishes who may deny their divorce parishioners from receiving the Eucharist.

Although Francis continues to uphold Catholic doctrine on birth control, abortion, and homosexuality, the pontiff has shown more plurality on family issues than his predecessors who believed the "traditional family" was under attack. In about three weeks, bishops from around the globe will travel to the Vatican for a synod on the family, and many religion experts have speculated that Francis may push for less harsh rules on issues such as divorce and cohabitation.

In the meantime, many of the unconventional Catholic couples married by the pontiff on Sunday were grateful for his acceptance. One bride named Gabriella who already has a child from a former relationship told the Italian newspaper La Repubblica:

We didn't feel worthy or able to meet the requirements of a good Catholic couple. But the Church under the leadership of Pope Francis has welcomed and embraced us.

More like this
How To Fight For Reproductive Rights, Based On How Much Time You Have
By Courtney Young
Rebekah Vardy & Coleen Rooney’s Trial Has Officially Begun
By Bustle UK
Here's How To Practice Self-Love In Small Ways Every Day
By Mackenzie Sylvester
Twitter Was Saying The Same Thing About Sam Ryder’s Surprising Eurovision Result
By El Hunt
Get Even More From Bustle — Sign Up For The Newsletter