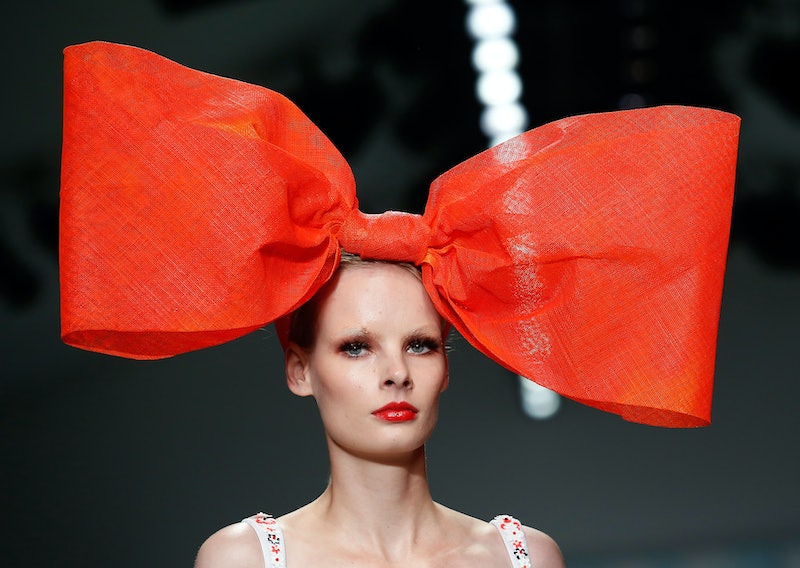 Last week, American designers took over the city during New York Fashion Week, making us dream and drool over their Spring 2015 collections. No scroll through Instagram, Twitter, or a Facebook feed was sans street-style photos, by-the-minute show recaps, and front-row candids of celebrities. And if you thought it was over, you might as well shut down your laptop and your phone for September, because Fashion Month is upon us, continuing this week with London Fashion Week. Already, Emilia Wickstead, Sibling, J.W. Anderson, Marchesa, Preen by Thornton Bregazzi, Marios Schwab, Paul Smith, Richard Nicholl, Matthew Williamson, and Mary Kantrantzou have sent their looks down the runway. And in high anticipation are Burberry, Tom Ford, Christopher Kane, and more.

However, even though London Fashion Week is only into day two, it seems that trends for Spring 2015 have already been birthed via the intersecting designs between New York and London designers. From bright florals to stripes and headpieces fit for a queen, the similarities are already making it known what we will most likely be seeing in store windows and even our closets next season. Take a look at the designers whose mood boards must have looked awfully similar as they prepped their latest debuted collections.

Preen by Thornton Bregazzi at LFW

More like this
What Is “Jello Skin”? The Latest Viral Trend To Know About
By Tomi Otekunrin
Kate Had A Solution When Tom Cruise Broke This Royal Rule At The 'Top Gun' Premiere
By Frances Stewart
‘90s Streetwear Brands That Are Making A Major Comeback
By Dominique Norman
14 Spicy Bralette Outfits For Vaxed Girl Summer, Round 2
By Avery Matera
Get Even More From Bustle — Sign Up For The Newsletter