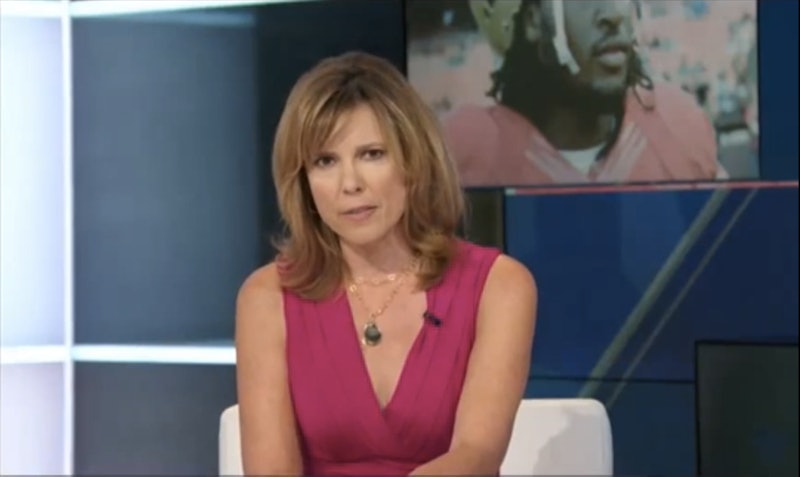 Well, the 2014 NFL season is in full swing, but it's hard to focus on the games when there are still some questions that needs answers to regarding the Ray Rice investigation and its league-wide domestic violence policies. In an emotional closing segment of ESPN's Sports Center today, Hannah Storm pressed the NFL to address domestic violence and its overall treatment of women — whether wives, employees. or fans. "What exactly does the NFL stand for?" Storm asked. Great question — let's see if the NFL ever has an answer.

Storm, mother to three daughters, gave a personal anecdote about how she doesn't know what to tell her children when they ask about the Ray Rice incident. "Mom, why did he do that?" asked her daughter, who has her first Fantasy Football league this season. "Why isn't he in jail?"

Storm said these questions were "seemingly impossible to answer." So she turned to the NFL with some questions of her own:

So here's a question: What does all of this mean for the future? What does it mean for female fans, whose dollars are so coveted by the NFL, who make up an estimated 45 percent of the NFL's fan base? Are fans and are families, are we as parents supposed to compartmentalize everything that's happening? Are we supposed to simply separate a violent game on the field from violent acts off the field? And if we do, what message does that send? So, here's some more questions: What exactly does zero tolerance mean to the NFL? What does it mean to the coaches, the GM's, the owners?

Storm also criticized the NFL and the Baltimore Ravens for not taking stronger action against Rice until after they saw the full video of Rice knocking his now-wife Janay Palmer unconscious in an Atlantic City casino elevator. The video was released by TMZ last Monday, but an anonymous law enforcement official told the Associated Press last week that a copy was sent to an NFL executive in April.

Whether or not the NFL saw the video, both the league and the Ravens staff knew what happened in the elevator from police reports, summons, and even Ray Rice himself. They are now under fire for not believing that such a brutal domestic assault truly occurred.

As Storm puts it, it's now time for us — the fans — to see some action:

In the NFL, apparently seeing is believing If the NFL and the Ravens had to see that video to be moved to significant action, then shouldn't those who support the league demand the same?

More like this
Chelsea Woody On Shattering Stereotypes In Surfing
By Leah Groth
Michigan’s Governor Is “Going To Fight Like Hell” To Protect Abortion Access
By Andrea Zelinski
How To Fight For Reproductive Rights, Based On How Much Time You Have
By Courtney Young
Jake Daniels Just Became The UK’s First Active Football Player To Come Out As Gay Since 1990
By Sam Ramsden
Get Even More From Bustle — Sign Up For The Newsletter