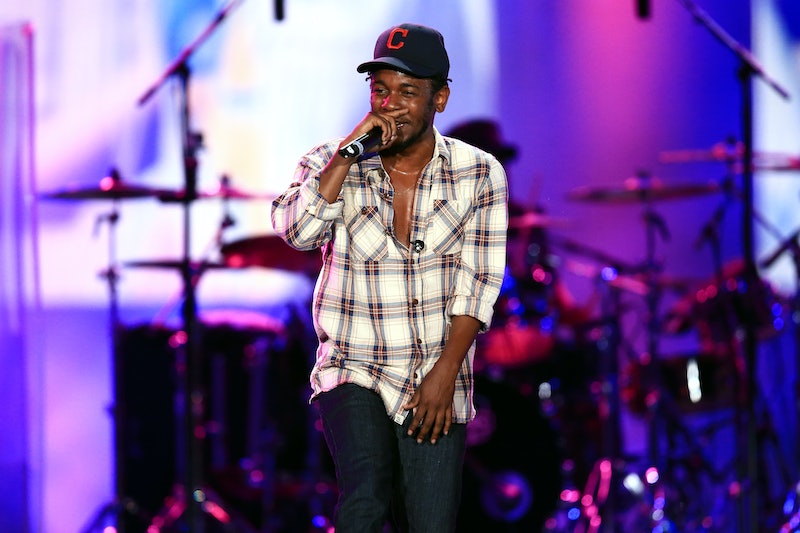 With so much competition in the music industry and the occasional celebrity feud, it’s always quite refreshing when celebrities are actually supportive of each other, especially when they come from completely different musical backgrounds. That is, Kendrick Lamar recently thanked Taylor Swift for her high praise of his music — which she recently relayed in an interview with Rolling Stone — and it was truly heartwarming. Sometimes I wish all celebrities were this nice to each other.

The 24-year-old singer Swift, who was featured in the magazine’s cover story for the third time in her music career, made a point about how Lamar’s music helps change her mood completely and that it has the ability to make her to feel much more powerful even on the worst day.

“You want to know a trick to immediately go from feeling victimized to feeling awesome? This is my go-to,” she said to Rolling Stone after pressing play to Lamar’s "Backseat Freestyle" on her phone while surrounded by paparazzi.

Of course, Lamar was extremely appreciative of Swift’s kind words about both the rapper himself and the hip-hop genre. In return, he had some remarks for Swift as well, showing just how simple it is for two artists to get along and be respectful of each other’s music, whether a pop country singer or a rapper.

“Some people always try to lock it down and categorize it for one particular listener,” Lamar told The Associated Press. “But it moves all, even people from other genres. I appreciate Taylor Swift for supporting not only my music but just the hip-hop culture. There’s really no gap. It’s music, and it feels good.”

So often it feels like there are numerous stereotypes that accompany various genres of music, as well as the people who listen to those genres. It’s as if you have to act a certain way to appreciate one type of music or that a certain song or artist immediately defines your lifestyle when that’s really not the case at all.

It’s nice to hear that both Lamar and Swift are encouraging each other and are supportive of one another’s musical endeavors. The two have set a good example for others in the industry and for music lovers in general.

And who knows? I bet Lamar is listening to "Shake It Off" to pump him up for his next performance right now.