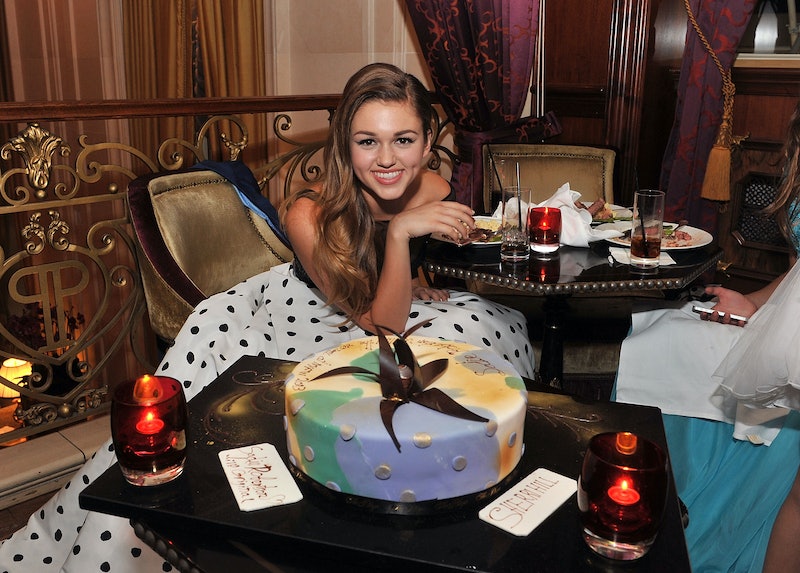 This young lady is about to make her debut on Season 19 of ABC's Dancing With The Stars. For those outside of the Duck-related reality world, Sadie Robertson of Duck Dynasty fame might just look like a cute, young teen. But those in the know have seen the granddaughter of the infamous (saying racist & homophobic stuff in public earns you the "in" before "famous") Duck Dynasty patriarch, Phil Robertson.

Like her controversial family members, Sadie is pretty religious — she’s basically what would happen if a Duggar could be an everyday teen. Of course, this every day teen also has big ambitions: Sadie isn't just the granddaughter of a reality star, she also started her own fashion line last year — with a conservative twist.

After a very special episode of Duck Dynasty where her father Willie was not impressed with her dress choices for an upcoming school dance, Sadie decided to create her own line of prom dresses that were "daddy-approved." She told US Weekly about her rules for the dress line, "It's gotta be long enough . . . the finger-tip rule, [and] everything modest up here."

Things should get interesting as Sadie is partnered up with Mark Ballas, who tends to let his choreography skew on the sexy side. She admitted in a behind-the-scene video, "My dance skills kind of stay in my room . . . it's only for me and my mirror to see!" It would seem that Sadie's religious and conservative background might be at odds with the sexy outfits and gyrations characteristic of DWTS.

And if her fashion line gives us any indication, she will have a thing or two to say about the costumes she'll wear for performances. I mean, she's 17 and created an entire fashion line that parents will approve because she wants to impress her father and not upset him by wearing something scandalous. This girl is not going to take "just put on the skimpy leotard and get out there" for an answer.

One thing's for sure, Sadie won't be getting any dance tips from Miley Cyrus. She told FOX411, "I get a tweet at least once a day that says, 'I hope Sadie Robertson doesn't turn out like Miley Cyrus.' When you're famous you do get so much attention that I can see how you could just think the world of yourself. I think if you go into it thinking that this is not for me, that this is for God, you'll be okay."Alright, alright. I get it. No twerking on DWTS.

But whether or not you agree with Sadie's conservative outlook, you've got to appreciate how industrious she is for a 17-year-old. At 17 I was crying over some boy and complaining about anything and everything around me (teenage angst, it's a bitch), so yeah, I am a little jealous of Sadie's success. Sure, her parents sell duck callers for a living, but she's got some pretty incredible stuff going on on her own.

She has a book coming out next month

Yep, people are already pre-ordering her book before it's even out. Live Original: How the Duck Commander Teen Keeps It Real and Stays True to Her Values comes out in October and talks about religion, life in the spotlight, and how she doesn’t let fame get to her head.

She & Her BF are totes adorbs

Sadie and her boyfriend Blake Coward have been together for a little over eight months now and they are adorable. I would bet big money that he will be in the crowd with the Robertson fam cheering his GF on.

She started The New Different

The New Different is a christian-based YouTube channel that Sadie started with her friend. "We started The New Different because we saw all of these people get famous from doing stupid things on Vine and YouTube and we thought if they can put the stupidest things online and have millions of views, why don't we start a Christian-based video series?" The channel helps teens with daily struggles, which you have to admit is a neat thing to do for others, whether or not you believe in Christianity.

Sadie is a basketball "pro" (Sort of)

Seriously? Didn’t we mention she does everything?