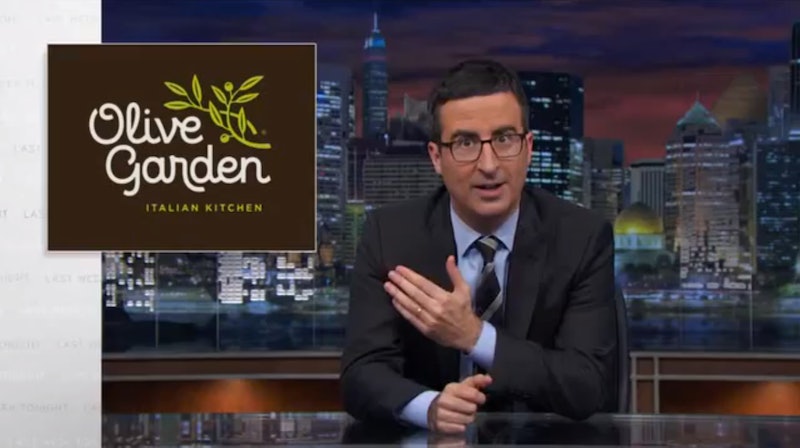 Last week, we declared the exciting news that society would be a little more heavenly for seven weeks with Olive Garden's Never Ending Pasta Pass. But not everyone was as enthused as I was — OK, most people actually groaned. Turns out that Olive Garden has been failing to meet certain standards. Last Week Tonight's John Oliver released his findings on Olive Garden, and it's almost enough to sway this lifelong fan. Almost.

In the age of Chipotle and food trucks, you can now have convenience and quality. You can gorge yourself on tasty food made with all-natural ingredients while checking your Facebook feed, all without even sitting down. That's 2014. Olive Garden, however, is apparently stuck somewhere between now and Who's the Boss? It's not rocket science why their sales are slipping.

Now, an activist hedge fund — and investor — is trying to overhaul the struggling chain by offering some tough love. Starboard Value, which describes itself as an "investment adviser with a focused and differentiated fundamental approach to investing," recently released an epic 300-slide presentation on just how terrible Olive Garden is.

But it also offered advice on how to cut costs and improve the food. For example, cut back on the copious amounts of bread, sell more alcohol, and salt the pasta water. Yes, the last bit anybody's grandma can tell you, but it took a New York-based investment adviser to deliver the message to Olive Garden.

John Oliver, being John Oliver, delivered findings from the report with some painfully apt witticisms.

The segment opens with Olive Garden's Never Ending Pasta Pass promotion, which is one of several strategies the chain is using to push profits up. Oliver is not on board.

Seven weeks of Olive Garden food. That is pretty much a one-way ticket to the hospitaliano.

So why has the chain stopped putting salt in their pasta water? As the report shows: To get a longer warranty on their pots. This is surprising in more ways than one for Oliver.

What is really shocking there is that Olive Garden uses pots at all. I always just assumed they microwaved cold pasta between two damp paper towels. That's what it tastes like.

The report goes on to argue that the result of the salt-less pots is a "mushy, unappealing product."

It also found — presumably through some deep, years-long investigation that required back-and-forth travel to Italy — that the fried lasagna bites were not authentic. Mind-blowing, I know. And it also discovered that the "vegetable lasagna topped with chicken doesn't make any sense."

Oliver's favorite slide was a side-by-side comparison of the vegetable lasagna topped with chicken dish on the website and in real life. It was a bit like comparing a Turks and Caico beachfront resort with the Motel 6 just off the North Jersey Shore.

What happened there?! I can only presume that between the first and the second photo that vegetable lasagana developed a massive crystal meth addiction.

But that's not all. Oliver says that the presentation was a ringing endorsement compared to the ads Starboard is running to shame Olive Garden into changing its ways. Here's a transcript of the ad.

Come on down to Olive Garden for an inauthentic Italian experience that is guaranteed to leave your family consistently disappointed.

Our food is mushy, unappealing, barely edible, and looks nothing like any of this.

And while you're here, come visit our kitchen to see our many still-under-warranty pots, uncorroded by any form of seasoning that might pleasure a customer's mouth.

That's why we have some of the oldest pots around.

In fact, think of us as a pot museum that occasionally serves something resembling food.