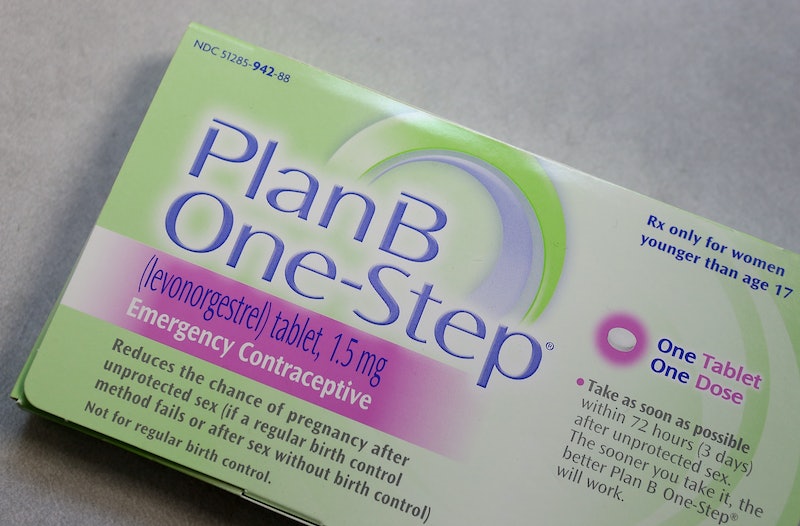 We already knew that women often have a hard time getting a hold of Plan B, even when they shouldn’t — but guess what? According to a new study, men can’t buy Plan B 20 percent of the time either, even though they, too, legally should be able to purchase it. Let’s just get this straight once and for all: There are no legal age restrictions preventing access to Plan B. Anyone can buy it over the counter, no matter how old they are or what gender they are, and they don’t need a photo ID to do it. Got that, pharmacies?

The study, which was conducted by Columbia University’s Mailman School of Public Health, sent male mystery shoppers to 168 New York pharmacies, covering three of the city’s neighborhoods. The men were 19, 25, or 28 years of age; they were instructed to give the reason that they were buying it for their female partners because the condom broke. Although the shoppers were able to acquire it 81 percent of the time, 19 percent of the pharmacies wouldn’t sell Plan B to them. Furthermore, 73 percent of the pharmacies who denied the shoppers access said that either the woman who would be taking it needed to be present while it was purchased, or that they needed to see the photo ID of the woman who would be taking it. The other 27 percent said they didn’t have it in stock (although whether or not this was actually true remains to be seen).

As the Huffington Post points out, it’s worth noting that the study was conducted in 2012; at that time, there was still an age requirement in place for the purchasing of Plan B. However, given that the requirement was 17, none of the men should have run into any problems with it. So why the difficulty? Said study author David Bell, MD, MPH, in a release:

“One possible explanation, the pharmacist may have thought that to comply with the age restriction the female needed to be present…. A second potential explanation is that pharmicists conscientiously objected to [emergency contraception] overall or its purchase by males. Anecdotally, speaking with a few pharmacists about the results, the request may have been a covert way to determine the presence or lack of coercion in a relationship.”

I’m willing to cut a little bit of slack for the pharmacists who were trying to figure out whether there was any coercion going on — but the other two reasons? Definitely not okay. As far as “complying with the age restriction” goes, there’s a hole in the argument: Yes, obviously the man purchasing Plan B isn’t going to be the one taking it — but who’s not to say that a woman trying to purchase it isn’t, say, an older friend acquiring it for an underage teen? We start going down an extremely slippery slope when we start asking for this kind of “proof"; although I kind of get that the pharmacies who did this were mostly trying to cover their arses, the logic is still too flawed to accept. And as for the pharmacists who “conscientiously objected” either to EC in general or to men buying it in particular? Sorry (by which I mean I’m not sorry at all), but you don’t get to make that call.

To be honest, the weirdest part about these findings is where they took place. In recent years, there have been a number of states in which people have been unlawfully denied access to Plan B and other EC — namely, Georgia, Texas, Oklahoma, Mississippi, and Alabama — but New York isn’t one of them. Apparently it doesn’t matter how liberal or conservative your area is — you still might run into trouble getting access to the care you need. Disheartening, no? But hopefully studies like Dr. Bell’s will raise awareness about the fact that this is happening; bringing the issue to light might help do away with it once and for all.