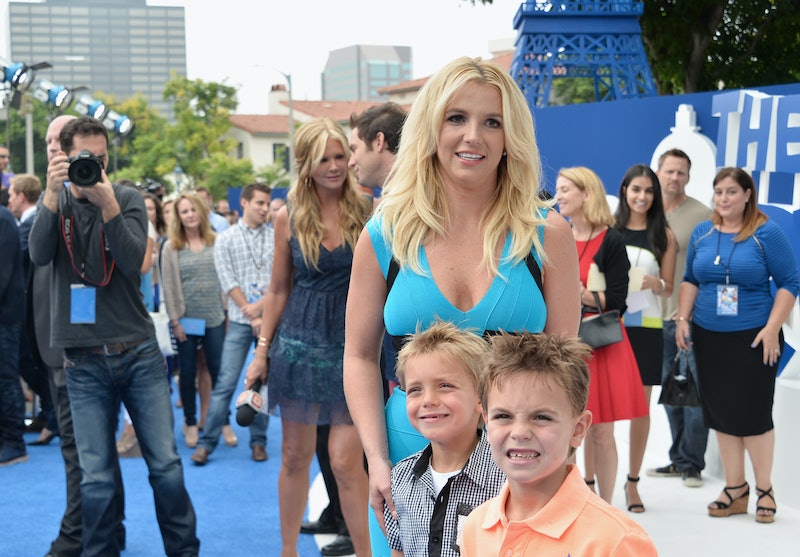 You know for pop royalty, Britney Spears’ sons, Sean and Jayden, are having a totally run-of-the-mill childhood. The family reunites during their soccer games — Spears’ ex-husband and the boys’ father Kevin Federline, his new wife, and their 2-year-old daughter joined Spears and her then-boyfriend David Lucado for a weekend match at the beginning of the soccer season. Then this past July, Spears’ took her sons on a trip to Disneyland, the equivalent of a pilgrimage for any kid’s summer vacation. See? It’s all typical childhood fun, though with the added bonus of having their mom be a Mouseketeer alum. Britney Spears even celebrated her sons’ birthday by throwing them a joint b-day party on Saturday because they’re birthdays are two days apart. Jayden turned eight on Sept. 12, while Sean turned nine on Sept. 14. My mom did the same for my sister and me when we were younger because our birthdays are just five days apart. It saved on party throwing expenses and the amount of leftover cake in the fridge. (Unfortunate as kid me wouldn’t have minded two leftover cakes.)

Spears threw a really rad skateboarding party for her boys, and it was complete with skateboard cake and helmet cake pops, and probably tons of other sugary treats fit for growing children. It sounds like there was much totally-hyped-up-on-sugar fun to be had at the skate park.

It's kinda nice to see that pop princess Britney Spears, who was a Mouseketeer at 12 and a pop star by 16, is raising her boys to just be normal kids. It's not that she purposely wouldn't or anything, just that with how popular Spears is — especially if you think back to how she was constantly in the news back when she had her children — you might think that the kids would definitely be in the public eye as well. But it seems they're really getting as close to an average childhood as possible. She even dresses them in the same shirt sometimes which as any person with siblings understands is the future bane of your existence as far as family photos goes.

I mean, just check out this mini home video of her sons' first time on a skateboard. Spears is rooting like a proud mama.

Maybe Sean and Jayden have found their life calling. Maybe they'll be skateboard superstars. But in the mean time, Spears is keeping it real and giving them a typical childhood. No music videos and song and dance numbers for these two.