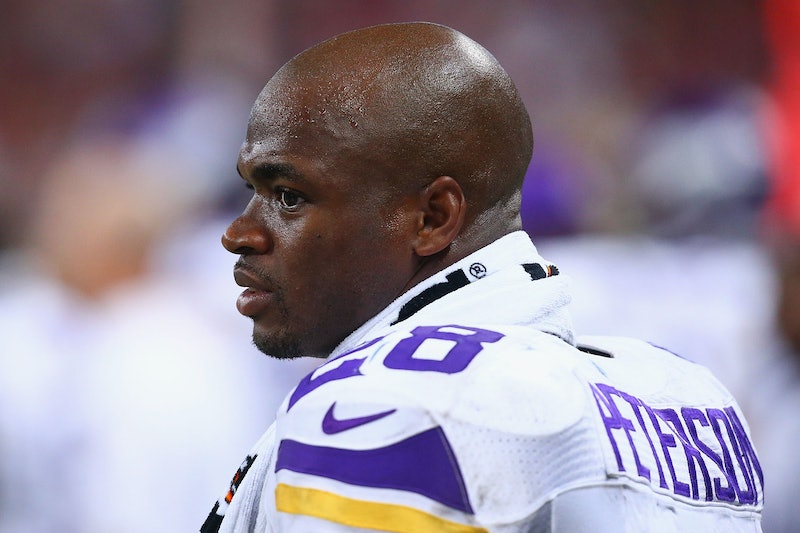 If you've been following news about the NFL, congratulations, because you've just made it through one of most depressing weeks possible. From the reveal of the graphic videotape showing the moment Ray Rice knocked his then-fiancee Janay unconscious, to the subsequent scandal over the NFL's handling of the case, to the harrowing child abuse charges against Vikings running back Adrian Peterson, there just hasn't been much to cheer for. Unless, of course, you don't care about any of that — like some Adrian Peterson fans before Sunday's game between the Vikings and Patriots.

Of course, not everyone who attended the game, nor are all Minnesota fans making excuses for Peterson's actions. Many fans that press spoke with, outside the team's TCF Bank Stadium, showed an appropriate level of discomfort, if not outright condemnation.

But you can always count on some bad apples to stick out at the worst possible times, and that was out in full force Sunday, too. By all accounts there were plenty of Adrian Peterson jerseys all over the stadium, and a few fans went way over the line in defending him — or, unthinkably, actually making fun of the charges against him. Be warned, this image may make you feel dirty by association.

That is a very enthusiastic Vikings fan wearing an Adrian Peterson jersey and brandishing a switch in one hand. Yes, you read that right — somebody decided to lampoon the very means that Peterson allegedly used to beat his 4-year-old son, and felt comfortable enough about it to grin for the camera. So, there's that.

But there are also a number of fans who've offered troubling comments on the Peterson situation. We get to see a handful of these responses thanks to the Boston Globe, whose reporters fielded opinions from fans on tape before the game. Make no mistake, countless Vikings fans are taking the news in stride, given the severity of the charges against Peterson.

Unfortunately, here are some examples of what some were saying to justify their love for their franchise's best player.

It remains to be seen exactly how serious the consequences will be for Peterson. The Vikings did deactivate him before Sunday's game, and according to NFL.com's Chris Wesseling, it's possible he won't be back for next week's game, either. The Vikings are reportedly not planning to cut Peterson over the indictment, however, and could end up seeking a trade instead.

The handling of Peterson's case right now is of the utmost importance to the NFL, and it should be, given the criticism the league's faced over it's attitudes and policies on domestic violence in recent weeks. As The Daily Beast notes, child abuse charges are in fact domestic abuse charges as well — while intimate partner abuse is what's been getting most of the press lately, this kind of violence comes in many forms.

More like this
What Is Jeanie Buss' Net Worth? The Lakers President Is Uber Rich
By Hugh McIntyre
Jake Daniels Just Became The UK’s First Active Football Player To Come Out As Gay Since 1990
By Sam Ramsden
Meet Michael Peterson’s First & Second Wife
By Morgan Leigh Davies
IRL ‘Staircase’ Characters Todd & Clay Peterson Still Think Their Dad Is Innocent
By Gretchen Smail and Rebecca Patton
Get Even More From Bustle — Sign Up For The Newsletter