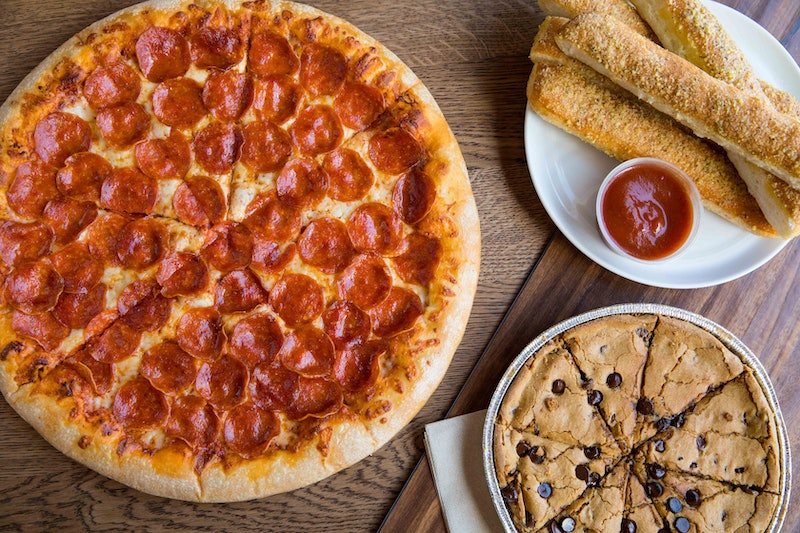 When you think of pizza, you automatically think of hamsters, right? That's what one rogue Pizza Hut location thought as it excitedly rolled out a giveaway promotion complete with signage and everything. A Melbourne Pizza Hut planned to give away a small animal with an order of 10 large pizzas — because why get garlic knots when you can surprise your party guests with a small rodent?

The Pizza Hut in Mount Waverly even printed a promotion banner that read "Buy Any 10 Large Pizzas and Get One Free Small Animal From Pets Story" (a local pet store in Melbourne). The banner is also emblazoned with the picture of a scared-looking gerbil — which, to them, is interchangeable with a juicer or a bath products gift basket — and the Pets Story logo, making it look as if the pet shop sponsored the giveaway.

It didn't take long for Pizza Hut to be bombarded with outrage — this time, it wasn't over their pizzas. An animal rights advocate noticed the promotion and notified Australian animal rights nonprofit Oscar's Law, who then posted the banner on its Facebook page, where hordes of commenters expressed their disgust over the giveaway. One commenter wrote:

This just teaches once again that animals are disposable objects. Pets are a long-term commitment that should be thought about properly not just because you bought 10 pizzas and got an animal for free. How disgraceful.

But this Pizza Hut's idiocy doesn't end there. When Mashable contacted Pets Story about the promotion, a representative explained that the sign was inaccurate and that the store would never condone such a giveaway. What went wrong? It was a matter of just one word. The sign was supposed to say "Get One Free Small Animal Kit."

"The sign wasn't proofed properly and we are paying for it now," explained a senior store employee.

If you're shaking your head at the cock-up, you're not alone. And nobody is likely more embarrassed than the corporate higher-ups at Pizza Hut. Pizza Hut Australia released a statement disassociating it from the Mount Waverly shop.

I guess this is what happens when local Pizza Hut employees try their hands at guerilla marketing. This made us wonder what other kinds of brilliant giveaway promotions the shop could have come up with. So many toppings and small animal combinations to choose from!

Order 7 Meat Lover's Pizzas and Get a Free Teacup Pig

Nothing like appreciating the bacon and sausage you're eating than looking at the source in the eye as you take each bite.

So you can say "aww" for a week or so before giving them away to some farmer.

Order 23 Supreme Pizzas and Get a Free Chinchilla

A ballin' animal for the Supreme baller.

Because it might actually be the humane thing to do.