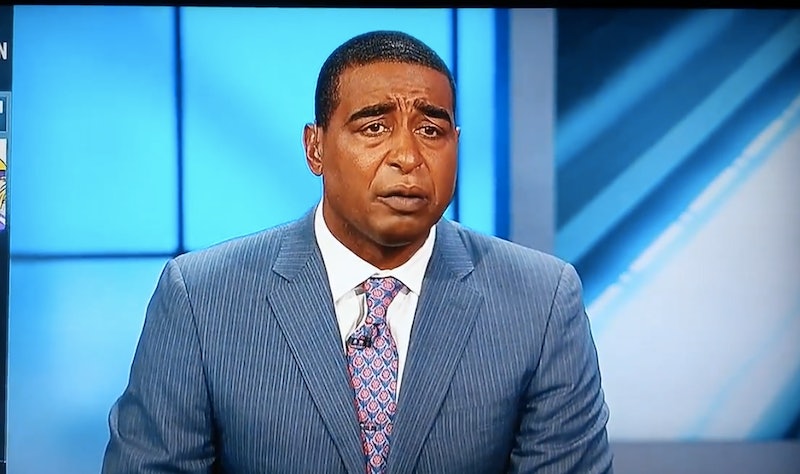 Although the Ray Rice case continues to dominate headlines, another abuse case rocked the NFL last week. Minnesota Vikings player Adrian Peterson was indicted by a Texas grand jury on Friday on charges of reckless or negligent injury to his son. NFL Hall of Famer and ESPN analyst Cris Carter became emotional over Peterson's case, sharing his own story and opinions with viewers Sunday.

Peterson allegedly hit his four-year-old son with a switch — a rod used for punishment — leaving welts and open wounds on the boy's body. He was deactivated from Sunday's Vikings game against the New England Patriots. Former NBA player Charles Barkley defended the practice on Sunday during CBS Sports' The NFL Today, calling it "a Southern thing" and saying "every black parent in the South would be in jail."

But Carter had some harsh words for Peterson, Barkley, and the NFL. During the roundtable discussion on ESPN's Sunday NFL Countdown, Carter, who once played for the Vikings, made a raw speech against hitting and whipping children:

This goes across all racial lines, ethnicity, religious backgrounds: people believe in disciplining their children. ... My mom did the best job she could do, raising seven kids by herself. But there are thousands of things I've learned since then that my mom was wrong. This is the 21st century. My mom was wrong. She was wrong about some of that stuff she taught me. And I promise my kids I won't teach that lesson to them.

Although the panel agreed that it was right for the Vikings to take Peterson off the field, his deactivation didn't last long. On Monday morning, the Vikings announced they will reactivate Peterson and he will return to practice this week. He's expected to play in the Vikings-Saints game on Sunday.

To be clear, we take very seriously any matter that involves the welfare of a child. At this time, however, we believe this is a matter of due process and we should allow the legal system to proceed so we can come to the most effective conclusions and then determine the appropriate course of action. This is a difficult path to navigate, and our focus is on doing the right thing. Currently we believe we are at a juncture where the most appropriate next step is to allow the judicial process to move forward.