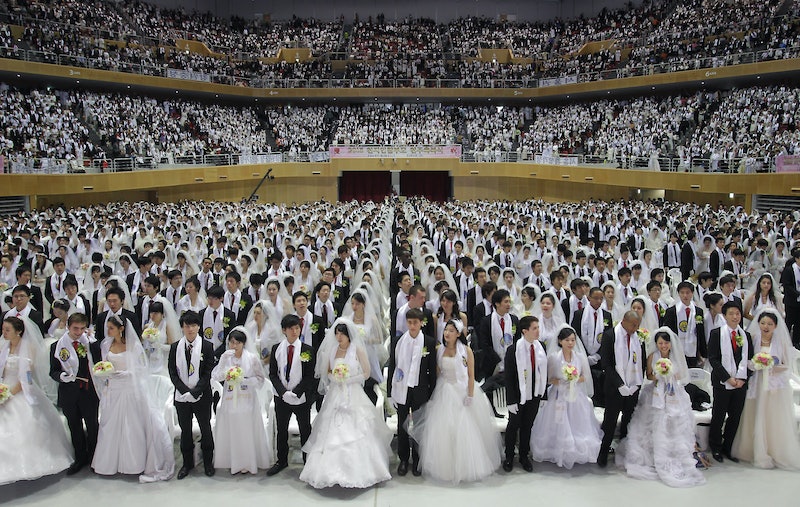 Sunday marked yet another milestone in the Catholic church's step toward progressivism and inclusivity. The man attempting to revamp the church's old-fashioned image, Pope Francis, married 20 couples outside St. Peter's Basilica, many of which were either cohabitating or had children outside of wedlock. This was no doubt a momentous occasion for the Catholic church, which had previously deemed such couples as "living in sin," along with other antiquated views.

But in the U.S., unconventional families are becoming more and more of the norm. Just look at the tabloids — it's clear by looking at celebrity culture that we now live in a world where the baby bump often precedes the ring, and with refreshingly little controversy.

This societal shift is chronicled in studies as well. According to the National Marriage Project, we have entered into a phenomenon called "The Great Crossover", which refers to the fact that having children outside of marriage has now become commonplace in Middle America. The study concludes that "the majority of young parents under 30 now have their first child before they marry," citing a statistic from their "Knot Yet: The Benefits and Costs of Delayed Marriage in America" report that "48 percent of all first births are now outside of marriage."

But what does this mean for our nation? The rise of unwed couples cohabitating and procreating certainly helps to relieve the stigma previously associated with these life decisions. Couples should be free to carry out relationships and create families in whatever manner they choose. In addition, living outside of wedlock has no bearing on whether or not a couple will eventually get divorced, according to a study by Arielle Kuperberg, an associate professor at the University of North Carolina at Greensboro, in the Journal of Marriage and Family.

The National Marriage Project, which provides "research and analysis on the health of marriage and family in America," however, is careful to cite some of the negative consequences of this modern concept of marriage and families. Bradford Wilcox, project director and co-author of the "Knot Yet" report, highlights a few salient downsides of young adults "putting the baby carriage before marriage":

What they often don't realize is that children born outside of marriage are significantly more likely to be exposed to a revolving cast of caretakers and the social, emotional and financial fallout associated with family instability and single parenthood.

That is to say, marriage can offer a stability that will often benefit children and propel them to go on to create their own stable marriages and families. This does not mean that an unwed couple cannot create a loving, secure household, but it does seem to depend on whether or not the couple (married or not) has the financial means and emotional maturity to do so. Research from the National Marriage Project concludes that it is more likely that families of unwed couples will have to address greater social, emotional, and financial concerns in comparison to unwed couples. This evidence is further supported by research from the Heritage Foundation (which we should take with a grain of salt because its a conservative think tank), in which senior research fellow Robert Rector adds that unwed couplings "are usually of short duration and unstable".

Whatever decision we make in terms of relationships and families, then, should be conducted with the upmost care and consideration of the potential consequences. It is imperative to remain open and welcoming to all couples, regardless of whether they adhere to tradition or join the ranks of the "new norm" for marriages and families in America. Doing so can only increase general sentiments of acceptance and perhaps lead to further progressive movements on behalf of the Catholic church. Gay marriage acceptance, anyone?