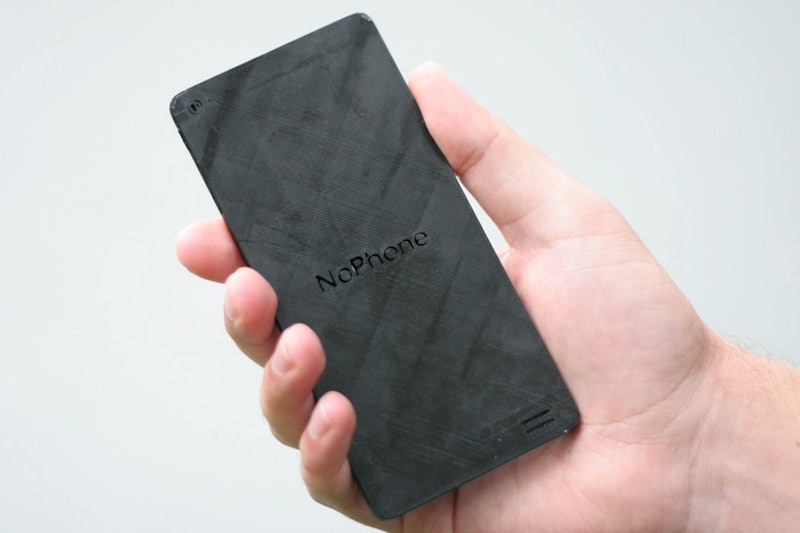 If you can't go a single day without your smartphone, you're not alone. You're just one out of 84 percent of the entire world population. It may have started out as a gag item, but let's seriously consider Dutch designer Ingmar Larsen's NoPhone, a dummy phone that looks like an iPhone but is literally just a block of plastic with zero tech capabilities. What would life be like with the NoPhone? Unable to make calls or send texts, it encourages an ancient form of communication that was once more popular than emojis: Human interaction.

That's the goal of the NoPhone. By replacing your regular smartphone with this "placebo," you'll get your fix of holding that familiar rectangular object in your hands. That gratifying sensation of fumbling through your purse worried you might have left your phone at the Indian restaurant only to be assured that it's still with you. You can heave the same sigh of relief with the NoPhone. But the distinguishing difference is that you'll have to actually talk to people — face to face.

Larsen and the NoPhone team have launched a Kickstarter to raise money for this revolutionary new device based on the primordial communication techniques depicted in cave paintings. It may sound primitive, but it may be the cure for a very real disease. The Kickstarter states:

Phone addiction is real. And it's everywhere. It's ruining your dates. It's distracting you at concerts. It's disrupting you in movie theaters. It's clogging up sidewalks. Now, there is a real solution.

Describing the device as a "surrogate," the NoPhone team says that the idea was born during a night at its local bar, where they regularly go to drink and socialize.

And by "socialize," we mean stare at our phones and occasionally look up from our screens to order another round, which is the norm nowadays.

So they came up with NoPhone. Judging by some of the testimonials, the NoPhone might be just what our tech-distracted society needs."With the NoPhone, my eye contact skills have improved 73 percent," writes Whitney R., a happy customer. Take a look at its cool features and glimpse what life could be like if we all had a NoPhone.

At 5.5 inches long, 2.6 inches wide, and .29 inches deep, it's just like the new 5.5-inch iPhone 6. The 3-D-printed prototype has a texturized surface, but the mass-produced version will be smooth like your favorite Apple products.

The NoPhone team promises that customers will "always have a rectangle of smooth, cold plastic to clutch" so that they'll never have to "experience the unsettling feeling of flesh on flesh when closing your hand."

But It's Better Than Your iPhone

Bet Apple can't say all this about their smartphones: The NoPhone is battery-free, shatterproof, waterproof, toilet-bowl resistant, and does not require upgrades or even a contract.

It Even Lets You Take Upgraded Selfies

The NoPhone team understands how accustomed we've become to certain technology-enabled luxuries, like the selfie. The selfie is practically a necessity these days, up there with health care and working plumbing. So the NoPhone takes that into consideration by offering an upgraded selfie-taking system: a mirror.

You can share selfies with friends by being with them in real life and both looking into the mirror, and you can even verbally hashtag your NoPhone selfies by "syncing your brain and vocal cords."

While it's true that at first it would feel like regression — you won't be able to post whatever clever thought pops into your head throughout the day; you'll have to write down directions before leaving the house; and booty calls will likely become extinct — but after some time, you'll come to see that going back to our roots and relearning how to have human-to-human interaction, while tedious, will ultimately be rewarding. Here's how the NoPhone can enrich our lives: