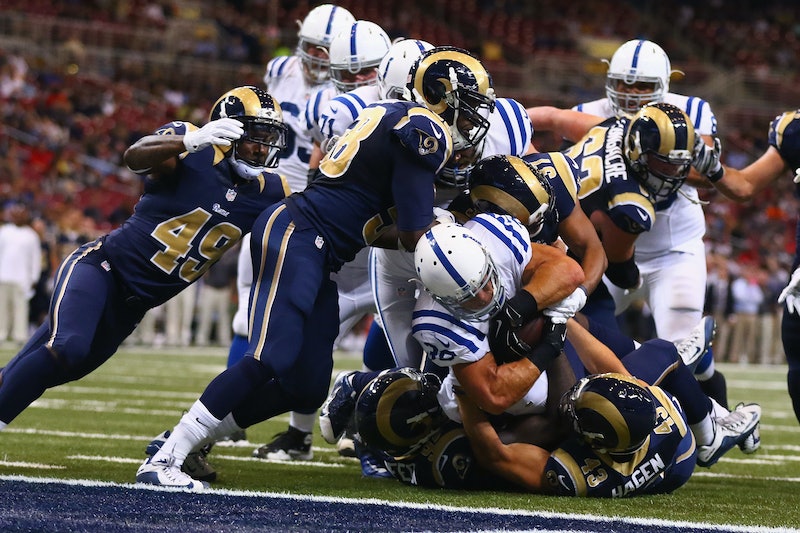 In junction with an ongoing lawsuit and just in time for the start of football season, NFL and the NFL Player’s Association just released a report revealing shocking data on the NFL and brain injuries; nearly three in 10 former players will go on to develop debilitating brain conditions. This means that almost 6,000 of around 19,000 former NFL players will suffer some sort of brain injury because of their profession.

The brain conditions known to be associated with professional football include Alzheimer’s, Lour Gehrig’s, Parkinson’s, and ALS. Repeated blows to the head have also been found to cause depression, dementia, and long-term behavioral changes, which are part of a disease called chronic traumatic encephalopathy, or CTE. CTE is only diagnosable after death, and has been found in 50 deceased former players, while an unknown number are living with the disease. Not only will a solid 28 percent of former players suffer one of these illnesses, but the diseases will develop earlier in the players than in the general population.

The new statistics are part of information being provided to the federal judge overseeing a class action lawsuit filed by former players against the NFL, claiming that they hid information that linked football concussions to brain injuries. There has been backlash against the case’s settlement that has been reached, but not officially approved, for $765 million. Critics of the settlement oppose certain terms, like the one that excludes a full payout to players who suffer brain injuries but have also experienced a stroke. Others simply think that it is not enough money — especially considering that the NFL collects 10 billion dollars in annual revenue.

But there are bigger concerns than the settlement's details. It seems as if we need to accept that tackle football inextricably leads to brain injuries. And while most of us nonprofessional athletes can simply wince at the number and try to sympathize, the actual players have to make the difficult choice between potentially risking their mental health and later quality of life or living out their dream of playing in the NFL, and experiencing all the fame and fortune that comes with it.

More like this
How To Fight For Reproductive Rights, Based On How Much Time You Have
By Courtney Young
The Music Industry Continues To Fail Black Women
By Precious Adesina
7 Exercises That'll Level Up Your Tennis Game
By Carolyn Steber
How To See The Lunar Eclipse On May 15-16, 2022
By Kaitlyn Wylde
Get Even More From Bustle — Sign Up For The Newsletter