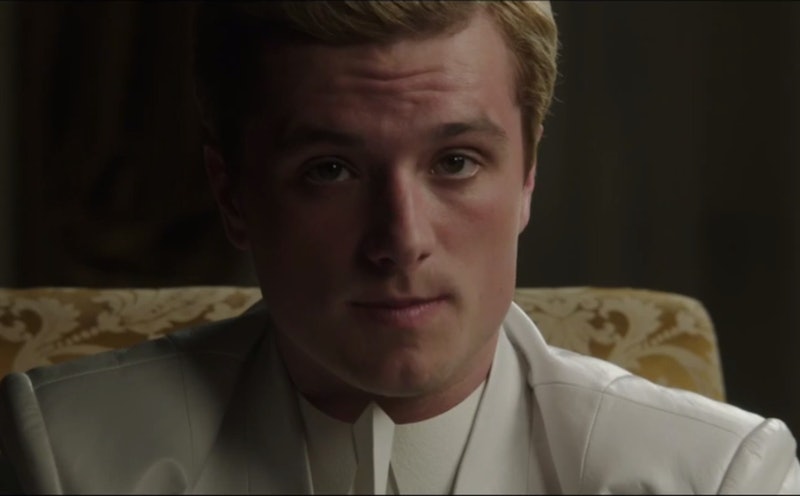 Big day for Hunger Games fans on Monday, when the Mockingjay, Part 1 trailer was released to the world with bated breath. And it did not disappoint. The Hunger Games franchise has been teasing the upcoming film for what feels like forever, releasing cast photos and teaser trailers, but now that we are only two months away from the film's release, it's time to buckle down and get serious about the future of Katniss and the rest of the characters in the series. So what is happening with your favorite characters at the peak of the rebellion?

The earlier trailers that we were tempted with showed very little Katniss Everdeen; luckily, the new trailer gives us a whole lot of her. In the new trailer, you can tell Katniss is completely ready to fight against The Capitol, but also completely worn down by all of the hardships she has endured in the recent games. It is heartbreaking to see how battled she looks, especially upon realizing that Peeta is alive, but proves just how convincing Jennifer Lawrence is as an actress. Will she be able to fight against The Capitol knowing that Peeta is in their "weapon" as Haymitch puts it? Or will she break under the pressure of being the Mockingjay, which the rebellion stands for?

Here's where the other characters are at in the trailer and the peak of the war and rebellion:

Peeta was featured in one of the first teaser trailers for the film as President Snow addressed Panem, encouraging them to stand "together as one". Peeta, who is standing loyally by Snow's side, is clearly being used as a message to those (Katniss) who decide to lead a rebellion. In the new trailer, a brainwashed Peeta encourages the rebellion against Panem to "lay down their weapons now" shocking Katniss that he is still alive, but standing along The Capitol.

The guy is still the worst. And although he only has a few lines in the trailer ("It's the things we love most [dramatic pause] that destroy us"), those few words send a chill down my spine since they ring so true to Katniss' journey.

We haven't really had the opportunity to see much of Liam Hemsworth in the first two films, but Mockingjay is a completely different story as we see Gale fight next to Katniss in the rebellion.

Effie is almost unrecognizable in the trailer, and not just because she makes a brief appearance. The once glam, colorful Capitol supporter is now completely taken over by the rebellion and war, as she stands beside District 13.