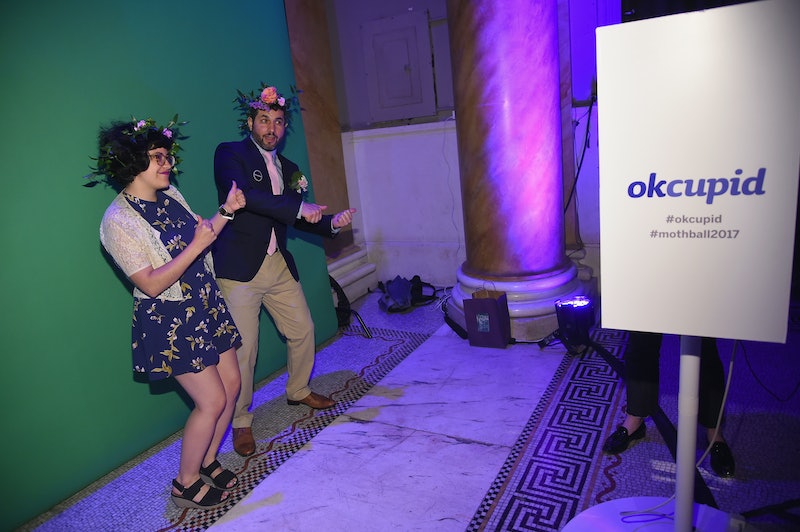 It’s not a surprise that there’s a schism between who we are when we think no one is looking and who we are when we’re trying to impress someone — but what is surprising are the ways in which it can manifest. And according to OKCupid cofounder Christian Rudder, our online dating behaviors are racist — at least a little bit. It doesn’t matter if you say you’re not racist, and it doesn’t matter if you even think you’re not racist. We are. All of us. And I don’t think I have to point out why that’s troubling.

Rudder’s new book, Dataclysm, builds on what the OKCupid blog, OKTrends, started: Taking the huge array of data that websites like OKCupid compile and seeing what it tells us about ourselves. Since the book was just released on September 9, Rudder has been chatting about it with the media a lot lately — and one of the topics that everyone keeps coming back to is the book’s chapter on race. Universally acknowledged as one of Dataclysm’s strongest chapters, it’s worth the discussion. Here’s what he found:

Speaking with The Atlantic, Rudder addresses one piece of analysis he did examining the types of words commonly used by one group of people, but only rarely used by others. The results, he says, are “so perfectly stereotypical it’s something out of an SNL sketch, almost”: For white dudes, that means there’s a lot of talk of “hunting and fishing” and a preference for “blonde hair and blue eyes”; for black men, “dreads” and “soul” come up a lot; Asian guys often note that they’re “tall for an Asian”; and so on. Curious, but perhaps not terribly notable.

However, the aggregate data becomes even more troubling when we start looking at what it says about race relations. The racial picture on OKCupid, Rudder notes, “isn’t the most pleasant one”; in fact, he describes it as “what you would expect if you’re a very cynical person.” He went into more detail about it during an interview with NPR’s Arun Rath earlier in September — and what we find when we look at the numbers is that there’s a bias against black users in particular. This bias reveals itself in pretty much every way you can measure success on a site: How people rate them, how many messages they receive, and so on. Not only that, but people will often say that they’re A-OK with interracial dating, that the race of their matches doesn’t matter to them, and so on and so forth — the things, Rudder says, you’d expect “a decent, forward-thinking person to say.” Their — our — behavior, however, reveals a clear racial bias. Not good. Not good at all.

So what are we to do with these uncomfortable and troubling truths? The picture, as Rudder points out, isn’t all bad; sure, people are vain, stupid, predictable, and kind of racist; but they’re also nice, and smart, and all sorts of other positive qualities that appear to be the exact opposite of the negative ones. We’re complex beings, and we have the capacity to change. My take on it? I firmly believe that one of the primary things that makes being on this planet worth it is pushing ourselves to become better than we are. As such, it’s my hope that pointing out behavior like this — things of which we’re all guilty — we can start to examine why it is we say, think, and do the things we do. Once we understand it, we can start trying to change it.

More like this
Are Leo & Capricorn A Good Match?
By Kristine Fellizar
The Top Mistakes Scorpios Make In Relationships (& How To Avoid Them)
By Nina Kahn
The Best Time To Date After A Breakup, According To Experts
By Bustle Editors
The “Whisper Method” Is The Latest Manifestation Technique Going Viral
By Meguire Hennes
Get Even More From Bustle — Sign Up For The Newsletter