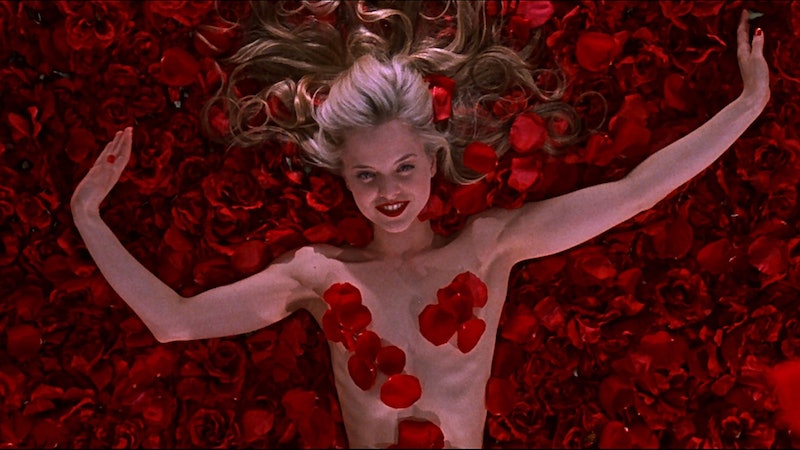 Fifteen years ago Kevin Spacey won his second Oscar for a film called American Beauty . The film tackles themes of conformity, lust, love, bigotry, family and countless others, and offered us an voyeuristic view inside the life of drowning Lester Burnham, a man wallowing in self-pity and cemented in the monotony of his 9-5 existence. While most of us have seen the Oscar-winning picture, there are a few things about the movie you may not know — from Thora Birch's underage nude scenes to Kevin Spacey's improvised monologues, here's 17 things to learn about the film, which turns 15 this week.

Before Mena Suvari snagged the role, the part of Angela was offered to Kirsten Dunst, Sarah Michelle Gellar and Brittany Murphy — who all turned it down! Kristen Dunst said of turning down the role: "I was only 15 then and I didn't want to kiss Kevin Spacey or be seen lying naked in those rose petals."

Due to 7th Heaven conflicts, Jessica Biel, who was originally cast as Jane, had to drop out — leaving room for Thora Birch to take her place.

The poster featuring a hand holding a rose on a stomach is not Mena Suvari, but model Chloe Hunter.

"American Beauty" is a type of rose. This particular variation is beautiful on the surface, but often rots away at its roots.

That epic scene where Lester hurls a plate of asparagus at the wall was actually intended to be thrown at the floor. His wall-throwing-antics were improvised, lending genuine reactions from Annette Bening and Thora Birch.

The Spartanettes' dance routine that so enamored Lester was choreographed by none other than Paula Abdul.

Lester, always annoying his daughter and wife without trying, enjoyed country music in the original script (which his family despised).

Carl's Jr. was the restaurant transformed into The Smiley fast food establishment.

Thora Birch had just turned 17 when she played the part of Jane, so her parents had to approve of that topless scene, and child labor representatives were on set while it was filmed. Yikes.

Ironically, there is a moment when Lester and Carolyn are driving together when Lester complains about missing a James Bond marathon on TV. Sam Mendes directed American Beauty, and of course would later go on to direct the James Bond Skyfall film. Zing!

The scene where Kevin Spacey croons "American Woman" in his car while stoned was totally improvised.

Carolyn Burnham could have been played by Holly Hunter or Helen Hunt.

The brilliant screenwriter of the film, Alan Ball, said during his Oscar acceptance speech that he came up with the idea for the film after sitting at the World Trade Center plaza when he saw a paper bag floating in the wind.