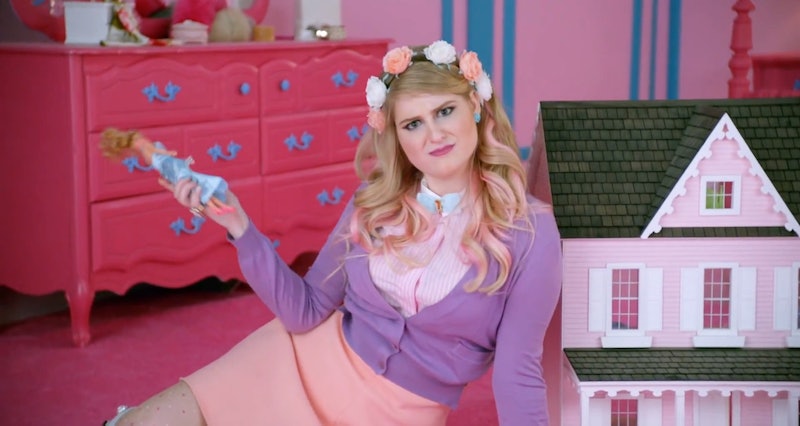 It's official: Meghan Trainor's infectious debut single "All About That Bass," is the No. 1 song in the United States right now — and I have a little bit of a problem with that. Yes, on the surface, "All About That Bass" may seem like an empowering anthem for women (and men) who struggle to love their bodies, but dig a little deeper, and you'll discover that the song's lyrics really aren't that empowering after all. Bummer.

Don't get me wrong, "All About That Bass" is a killer pop song in some ways — it's fun to bop along to it and the chorus will get stuck in your head after only one or two listens — but it does a really lousy job of promoting true body acceptance. Chloe Angyal, a senior editor at Feministing, cut straight to the heart of the issue when she told Vox's Kelsey McKinney recently that "All About That Bass" has "a very limited definition of what it means to love your body." Angyal said that it's almost as if the song is telling women: "You can love your body — but only if men love it, too." Just look at these lyrics:

Yeah, it's pretty clear I ain't no size two

But I can shake it, shake it like I'm supposed to do

'Cause I got that boom boom that all the boys chase

Yeah, my mama she told me don't worry about your size

She says, "Boys like a little more booty to hold at night."

Further, Trainor really sends a mixed message about body acceptance when she proudly declares that we're all "perfect from the bottom to the top," but then goes on to mock women who she calls, "skinny bitches." True, she assures us that she's "just playin'," but if the point of "All About That Bass" is truly to inspire people to love their bodies, as Trainor told Billboard , is using the term "skinny bitches" a productive, smart choice? No, I don't think so.

Given the attention that "All About That Bass" has received lately for its troubling lyrical content, I started to wonder what the song might sound like if it were actually written as the inclusive, body-positive anthem Trainor claims it to be. So I took a stab at rewriting some of the song's lyrics. No, I'm not a songwriter — Trainor knows how to craft a killer hook much better than I do — but I do know that we don't need outside approval to feel good about our bodies. I also know that no matter what your body looks like, and no matter what it is or is not capable of, it is worthy of love and respect.

Because you know I’m all about bodies

And honestly, neither should you

And you would stop staring if you had any class

I see the magazines, workin’ that Photoshop

But we gotta make it stop

‘Cause true beauty, beauty, I’ll have you know

It ain’t about perfection, yeah that myth’s just gotta go

Yeah, my mama she told me don’t worry about your size

She says, “Boys like a little more booty to hold at night.”

I said, “Mama, it’s not about whether guys think I’m hot,”

“‘Cause true body acceptance means I’m lovin’ what I got.”

I’m super proud of my ass

‘Cause I’m here to tell ya

Every f$*#in’ body’s worth it, from the bottom to the top