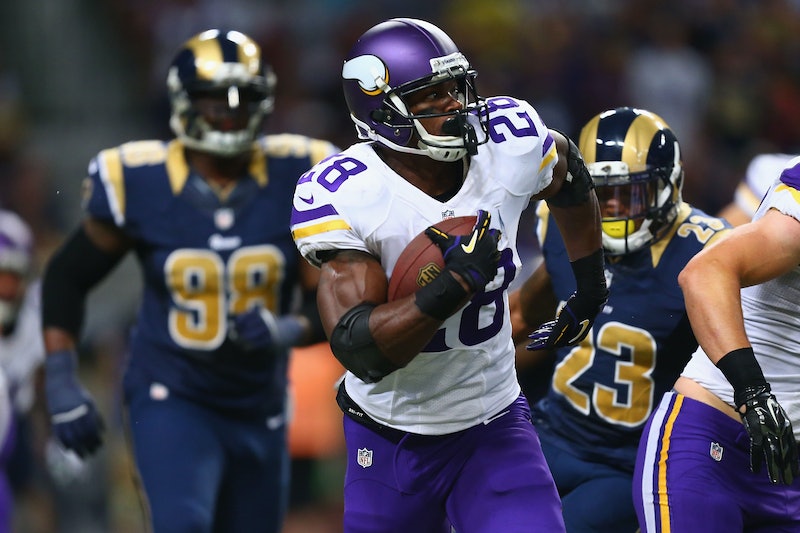 Injuries in the NFL are practically part of the job description, but those injuries are generally relegated to incidents on the field. Yet in what is likely the worst week in the NFL's history, football players seem to be taking their aggression out both on and off the field. Following his indictment on charges of child injury, Adrian Peterson has released a statement that, while eloquent and seemingly heartfelt, stops just shy of a true apology.

While Peterson has asked for privacy during a difficult time for him and his family, the Minnesota Vikings' star running back also effectively admitted to his guilt. This will prove important: in the weeks to come, the consequences of his actions are to be determined by a Texas jury. "I want everyone to understand how sorry I feel about the hurt I have brought to my child," he wrote.

I never wanted to be a distraction to the Vikings organization, the Minnesota community or to my teammates. I never imagined being in a position where the world is judging my parenting skills or calling me a child abuser because of the discipline I administered to my son.

Of course, like Rice before him and like Michael Vick before Rice, he has indeed caused a great deal of distraction, not only to the Vikings, but also to the NFL at large. With cases like his and like Rice's shining an increasingly concerning spotlight on the prevalence of domestic violence amongst football players (and the apparent inability of the NFL to deal with these travesties), there seems to be growing concern that the men idolized for their athletic abilities on achievements on the field are being excused for what is frankly inexcusable behavior off of it.

I voluntarily appeared before the grand jury several weeks ago to answer any and all questions they had. Before my grand jury appearance, I was interviewed by two different police agencies without an attorney. In each of these interviews I have said the same thing, and that is that I never ever intended to harm my son. I will say the same thing once I have my day in court.

Intentions, of course, are considerably less important than actions, at least in a court of law. Peterson also notes:

I have to live with the fact that when I disciplined my son the way I was disciplined as a child, I caused an injury that I never intended or thought would happen. I know that many people disagree with the way I disciplined my child. I also understand after meeting with a psychologist that there are other alternative ways of disciplining a child that may be more appropriate.

I have learned a lot and have had to reevaluate how I discipline my son going forward. But deep in my heart I have always believed I could have been one of those kids that was lost in the streets without the discipline instilled in me by my parents and other relatives. I have always believed that the way my parents disciplined me has a great deal to do with the success I have enjoyed as a man. I love my son and I will continue to become a better parent and learn from any mistakes I ever make.

In this respect, Peterson has met with considerable support from other members of the NFL, including Darnell Dockett of the Cardinals and Mark Ingram of the Saints chiming in on Twitter to voice that they, too, had been similarly disciplined as children.

But as retired player Donte' Stallworth pointed out, standards for acceptable disciplinary action have changed significantly in the past few decades, and so too have the laws.

I am not a perfect son. I am not a perfect husband. I am not a perfect parent, but I am, without a doubt, not a child abuser. I am someone that disciplined his child and did not intend to cause him any injury. No one can understand the hurt that I feel for my son and for the harm I caused him. My goal is always to teach my son right from wrong and that's what I tried to do that day.

I accept the fact that people feel very strongly about this issue and what they think about my conduct. Regardless of what others think, however, I love my son very much and I will continue to try to become a better father and person.

In the days since Peterson's indictment, his fame has quickly turned into infamy as increasingly disturbing reports about his chosen method of discipline have emerged. According to police reports, Peterson's use of a switch — a tree branch stripped of its leaves — on his 4-year-old son led to a number of injuries, some more severe than others. Allegedly, the young boy suffered cuts and bruises to his back, buttocks, ankles, legs and scrotum. The reports also claim that his hands were injured after trying to defend himself from the lashings.

After being taken to the doctor, Peterson's son told authorities, "Daddy Peterson hit me in the face." According to police reports, Peterson himself also sent a series of text messages to his son's mother, detailing the injuries. In one text, he admitted to feeling guilty about the extent of the punishment, writing, "[I] felt bad after the fact when I notice the switch was wrapping around hitting I (sic) thigh," and later, "I felt so bad, n I’m all tearing that butt up when needed! I start putting them in timeout. N save the whooping for needed memories!"

But regardless of his remorse, doctors and authorities agreed that Peterson's actions were the equivalent of "reckless or negligent injury to a child," and Peterson was forced to post a $15,000 bond after his arrest. Ultimately, it seems that while Peterson is sorry his son was hurt, he's still not entirely convinced that his methods were inherently wrong. Unfortunately for Peterson, it would appear that the rest of the country isn't exactly on his side.

More like this
How The City Healed Five Years On From The Manchester Arena Attack
By Ella Glover
Ryan Reynolds Brought Some Famous Friends To Wrexham A.F.C's Last Game Of The Season
By El Hunt
Jake Daniels Just Became The UK’s First Active Football Player To Come Out As Gay Since 1990
By Sam Ramsden
Chelsea Woody On Shattering Stereotypes In Surfing
By Leah Groth
Get Even More From Bustle — Sign Up For The Newsletter