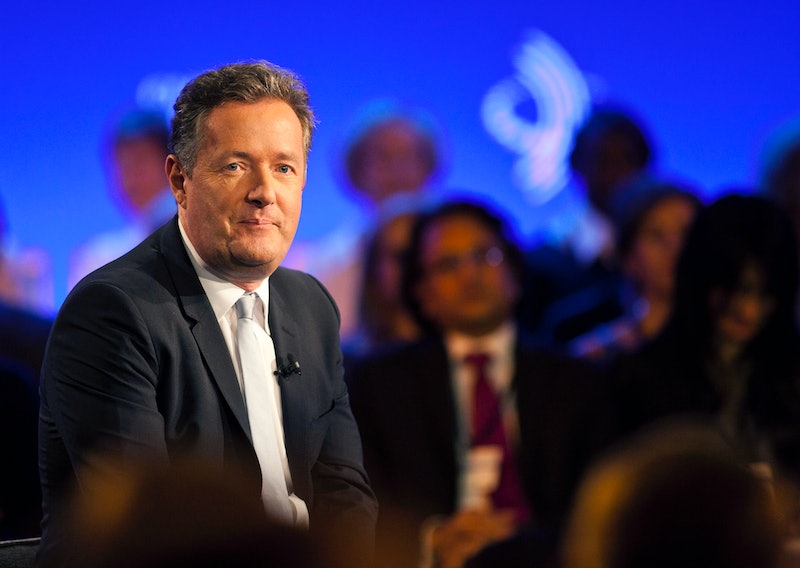 Remember the Piers Morgan era? It began when veteran broadcaster and interviewer Larry King retired from CNN in late 2010 — but Piers Morgan Live never matched the success of King's show. Over the course of its three-year run, Morgan managed to make a ton of people dislike him, from every background imaginable, and he ended up returning to his native Britain. But now, our neighbors across the pond may dump him off on us once again — Morgan offered to leave the United Kingdom if Scotland voted "no" on becoming independent from the U.K. on Sept. 17.

This is a deal that even the staunchest proponent of Scottish independence should think long and hard about. Popular support throughout Scotland to vote "yes" on the referendum and split from the U.K. has been gaining steam in recent weeks. There are a ton of historical, political, and economic reasons the Scottish people might favor an independent nation over being part of the U.K. — they actually have a lot of of oil under their territory, for instance, and independence would allow Scotland to reap more of the profit from its production.

Morgan made the offer on Twitter, and this at least shows a wry awareness of just how bitterly disliked he is in some places — a fact which, really, is kind of part of his schtick. Sometimes, his efforts to be a headline-grabbing television personality resulted in some pretty bad publicity, and demonstrated a very thin skin on his part. You're probably already aware of this.

For a prime example, you needn't look any further than his interview with transgender activist and author Janet Mock, with sparked a storm of controversy. The banner that appeared underneath Mock during their sit-down was one source of consternation, as it misgendered her, calling her a "boy until age 18."

Mock also objected to Morgan's question that were aimed to emphasize that sensationalist aspect of her story. For example, he began the interview with this:

Had I not known anything about your story, I would've had absolutely not a clue that you had ever been a boy, a male. Which makes me absolutely believe you should always have been a woman, and that must have been what you felt when you were young.

As a way to kick off an interview, this was pretty rough. What Morgan said, in effect, is hard to interpret as anything but "you're so pretty, I never would've thought you were trans." And the fixation on raising the image of her childhood as a biological male went on... and on. Her discontent stirred up a backlash against Morgan, who basically responded by repeating "cisphobia" over and over again, a sarcastic retort to everybody who accused his interview of being transphobic.

Morgan welcomed Mock back onto his show to address the dust-up the following day, but contrition wasn't exactly on his mind — he introduced her by complaining about his "infuriating last 24 hours" of dealing the online criticism, and asked Mock to explain "why I've had to go through this," making clear that his own offended sensibilities were what was most urgent about the situation.

To her credit, Mock was cool and articulate in her response, explaining how his repeated references to her being "formerly a man" offended people by conflating her biological sex at birth with her gender identity, which was erroneously bestowed on her as a baby. Butto the contrary, Morgan's rankled ego was bristling throughout, hurt that his attempt at public allyship hadn't been met with the praise he seemingly expected.

Morgan was never a stranger to having his social commentaries picked apart and disagreed with, and it came from all sides of the political spectrum — conservatives took regular exception to his high-profile advocacy for gun control reforms in the aftermath of the Sandy Hook school shooting, and he's also riled up secularists and athiests with his broad generalizations of people who don't believe in God.

Sometimes his drive for ratings seemed to push him to inviting on deliberately provocative, sensationalist guests, too — handing over his CNN platform to prominent conspiracy theorist Alex Jones, for example, for a conversation anybody familiar with Jones knew wasn't going to go anywhere.

Now, Morgan's throwing the weight of people's disdain for him, specifically that of the Scottish people, to try to convince them to vote against their own independence. It seems like a long shot, I admit, but whenever you close your eyes and see Piers Morgan's wide-eyed indignation staring back at you, well... I can understand the temptation, at the very least. But honestly, guys, would you mind hanging onto him for a while? We've barely had six months off!

More like this
The Church Of Scotland Votes To Allow Same-Sex Marriages
By Sam Ramsden
Yes, Billboard Queen Angelyne Really Ran For Governor Of California
By Brad Witter
How To Support Gun Control Reform Right Now
By Morgan Brinlee and Carolyn Steber
10 Times Diana & Meghan Spoke Similarly On The Royal Family
By Sophie McEvoy
Get Even More From Bustle — Sign Up For The Newsletter