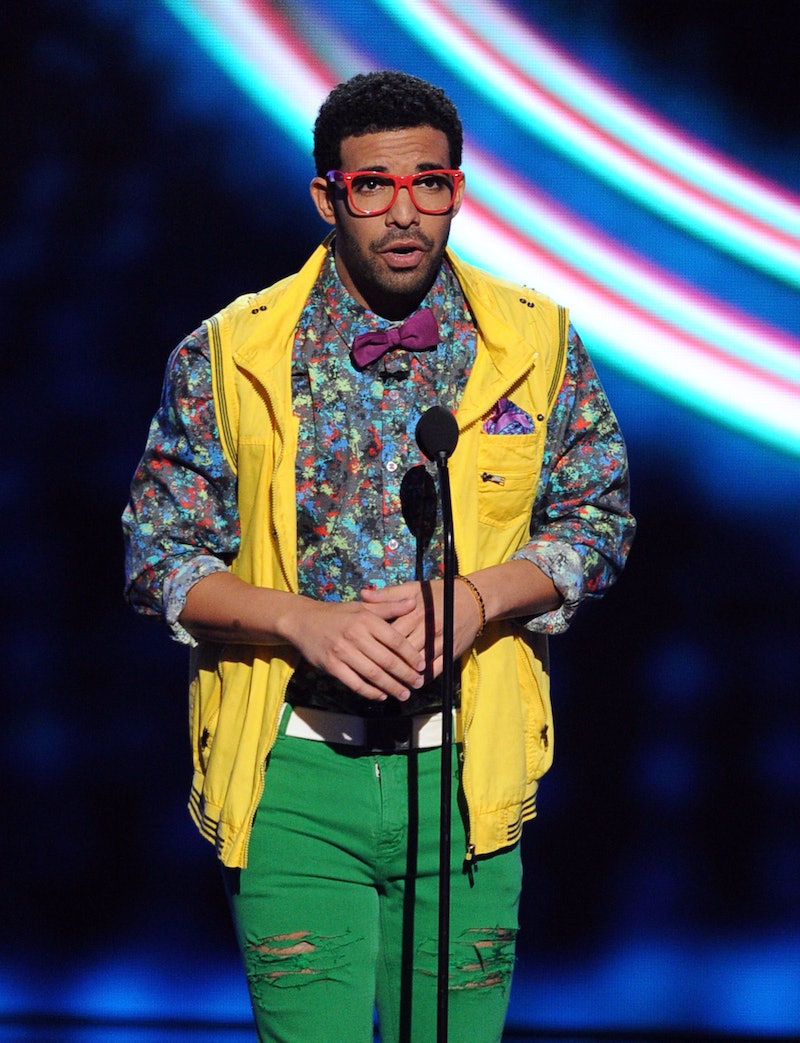 If music were a school playground, Drake would be the kid sitting in the corner writing romantic love poems to his crush, endlessly teased by the bigger kids and never catching a break for being a generally sweet and sensitive guy. Drake is the Tina Belcher of rap: he's poetic, he's sensual, and he really seems to like butts. Sadly for Drake, he tends to get made fun of a lot for his romantic, somewhat emotional introspective lyrics, and for being "soft", i.e. a former teen actor-turned rapper. In the past, Drake has spoken out against his Revenge of the Nerds personal storyline in an effort to break away from his lonely-nice-guy image, but lately it seems he's turned a corner and started embracing his inner nerd.

In recent a display of unprecedented, completely shameless and unabashed nerdiness, Drake uploaded a picture of himself on Instagram that features him Photoshopped into a Harry Potter scene. The caption reads, “Me at Hogwarts scheming on Hermione. #DrakeOMalfoy #Can’tStandMuggles.” Let it be known: Drake reads Harry Potter (and he also, maybe has a lot of time on his hands). Let the memes begin.

It's great to see Drake really embrace his inner nerd and make a commitment to this thing. Hopefully, this is the first of many shameless nerd-outs to come from Drake. In celebration of Drake's coming into his full-fledged nerdiness, let's reflect on all the times Drake was a not-so-secret nerd:

The time he posted a picture of himself as Drake-O Malfoy:

The time he was really into cosplay...

The time he wrote a really sweet song about side pieces:

Side pieces need love too.

When he tweeted his love for strawberry margs:

When he was very concerned about lint...

And wanted to aggressively remove it at a basketball game.

Those times he was the proudest girlfriend:

When he said he didn't want any new friends...

and gave himself a bunch of new nicknames.

The time he did this:

More like this
Harry Styles Opened Up About Olivia Wilde With A Rare Comment About "Trust"
By Sophie McEvoy
Selena Gomez Joked About Her Relationship Status In Her ‘SNL’ Monologue
By Grace Wehniainen
Twitter Is Upset About The 'American Idol' Top 3 Results: "Who TF Is Voting?"
By Jake Viswanath
How 2 'American Idol' Singers Performed With COVID-19 & Made It Into The Top 5
By Jake Viswanath
Get Even More From Bustle — Sign Up For The Newsletter