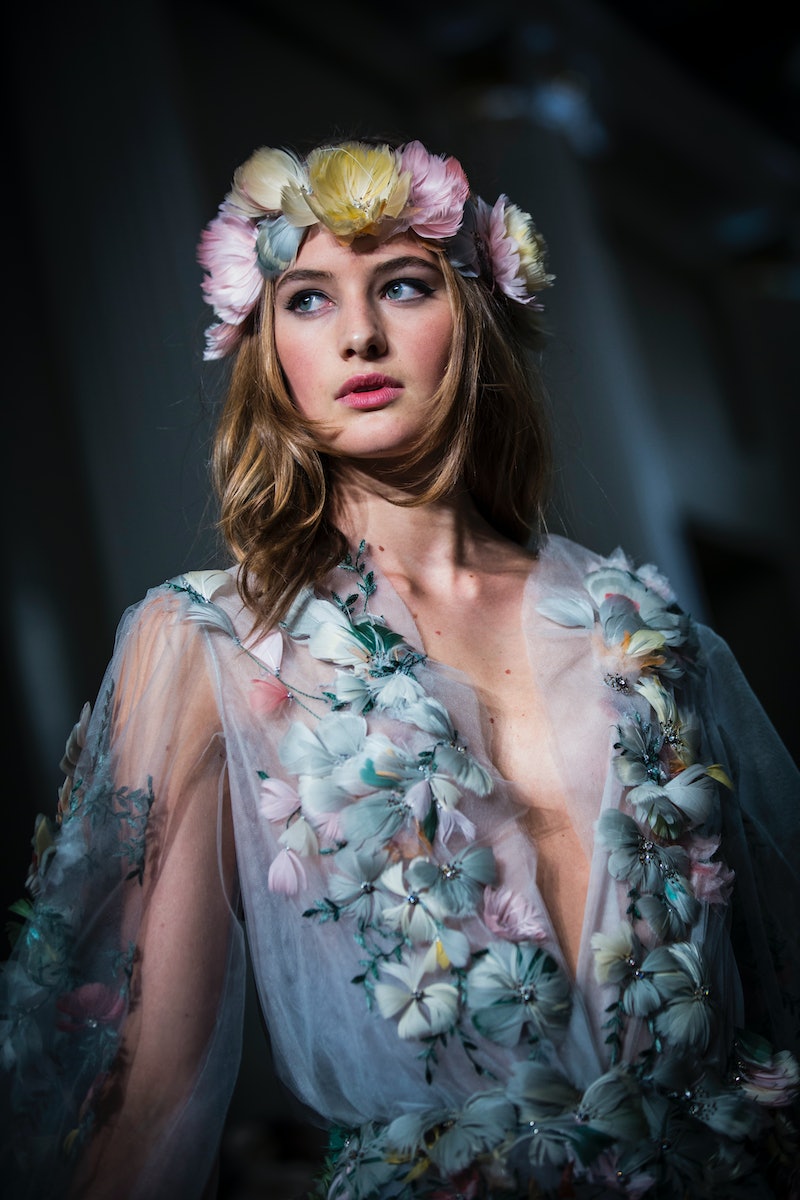 "All good things are wild and free," said Henry David Thoreau. And every fashion blogger touting a boho-chic image. OK, I'll plead guilty to this one. But don't delete that Twitter bio quote just yet, because London Fashion Week is well underway and it seems that UK designers are in full agreement — wild and free is the way to be. Marchesa, Burberry, and Mary Katrantzou took their collections en plein air, drawing inspiration from the sea, flora and fauna, and even some buzzing bees.

The Marchesa show, which marked a London homecoming for New York based designers Georgina Chapman and Keren Craig, featured billowing sleeves, lace details, romantic ruffles, and lots of flowers. Emphasis on lots. According to The Telegraph, Chapman wanted the collection to be, "a little bit gypsy, a little bit bohemian, with a bit of an edge to it." The inclusion of the natural, such as flowers and feathers, heightened the woodland romanticism of the collection, which was supposed to inspire the feeling of Kate Moss at Glastonbury. Dig out those wellies! To top it off, the free-flowing, soft wavy hair evoked that classic effortlessness that only takes us mere mortals several hours in front of the mirror to replicate.

Burberry continued to keep things wild with a birds and bees inspired runway show. Designer Christopher Bailey was inspired by Britain's wildlife, "[its] resilience, but also the delicacy," Bailey said. We saw this through wasp-waisted jackets, bee-and-butterfly print dresses, and shades of beetle-green and honey-bee yellow. Intriguingly whimsical, and the subtle make-up certainly sounds appealing, but I'm not quite sure how I feel about cocooning myself in insect prints.

Mary Kantrantzou made a splash with her collection and went back to nature as well. Waaaay back. The it designer drew inspiration from Pangaea and Panthalassa. And no, those aren't Game of Thrones characters. She thought about the planet 200 million years ago, the supercontinent, the super-ocean, "the way life-forms evolved from sea to land," according to Style.com. Instead of her trademark prints, Kantrantzou played with textures, mimicking a serpent's skin and tectonic plates of glitter. The collection was a walking geography lesson, far more ethereal than anything I saw in my college classes.

Whether you prefer to deep-sea dive, sting like a bee, or frolic in a field of flowers, prepare to get a bit more earthy come Spring. And don't worry — I'm already searching for the next literary quote to inspire next year.

More like this
The 6 Best Balaclavas To Keep Your Face, Head & Neck Comfortably Warm
By Jenny White
Ed Hardy-Inspired Cross Nail Designs Are Majorly Trending
By Danielle Sinay
Machine Gun Kelly Wore A $30K Diamond Mani To The BBMAs
By Paris Giles
Meghan Markle’s Favourite Skincare Brand Has Finally Landed In The UK
By Tomi Otekunrin
Get Even More From Bustle — Sign Up For The Newsletter