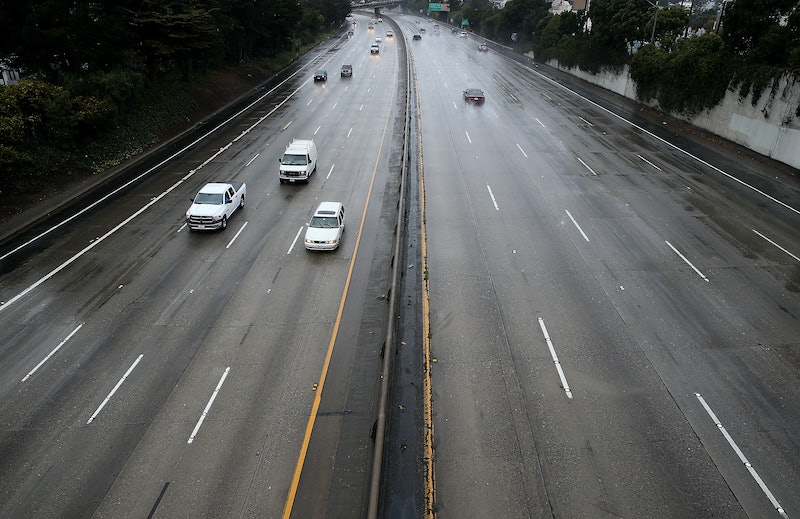 One of the scariest moments of my life happened on a highway outside of Boston, when an enraged driver followed me for no less than 10 miles, screaming obscenities and cutting me off at every opportunity. But apparently, that instance of road rage is nothing when compared to other states, according to Insure.com, who interviewed 2,000 Americans and concluded that drivers in Idaho are the rudest in the country. Both New York and Massachusetts make the cut (which is the least surprising thing that has happened all year), but apparently, neither state is quite as bad as Idaho, based on Insure.com's survey. Ironically, it is both the plethora of painfully slow and overly aggressive Idahoan drivers that supposedly makes this state the worst place to have a car.

According to Insure.com, Idaho is comprised of two sorts of drivers — "Those who are moving so slowly that they’re judged to be rude, and the aggressive drivers who speed around them and flip them off." For the most part, some observers note, Idahoan drivers seem perfectly content cruising at 5 to 10 miles under the speed limit, which would be fine if everyone had the same laid back mentality.

Unfortunately, this is not the case in Idaho. For those drivers who prefer to go 5 to 10 miles over the speed limit, being held back by a leisurely meander is enough to tip them over the edge, and this creates a uniquely tense situation in the otherwise friendly state.

But despite the alleged rudeness of Idaho's drivers, they seem to be exceptionally safe, as Idaho's insurance premiums are among the lowest in the country, ranking 48 out of the 50 states and Washington D.C.

Speaking of D.C., the nation's capital takes the second place prize for the rudest drivers. Sam Russell, a new D.C. resident, told Insure.com, "Driving in D.C. can be compared to the recklessness of our politics: self-serving, abrasive and unsafe." Ouch. But these claims aren't without merit — according to a Driverside study, DC is the number one place for speeding tickets in the nation, which may explain its high insurance premiums, which are the fourth most expensive.

As for New York, which ranked third on the list, the rudeness of the drivers isn't exactly only the fault of the drivers — in the city where the pedestrian is king, it is no wonder that drivers often get fed up. Moreover, in the city that never sleeps and is always in a rush, a car wreck is no reason for a delay, which may explain why drivers display a distinct lack of compassion when another one of them is in an accident. Debi Tracy told Insure.com that fellow motorists berated her for not getting off the road, to which she responded, "I would have loved to have been able to move my car, but I was heading off to the hospital in an ambulance."

Rounding out the top five are Wyoming, which has the second greatest number of roadway fatalities involving large vehicles like trucks and SUVs, and Massachusetts, which seems to pride itself on their nasty reputation by featuring "Masshole" bumper stickers. I, for one, as a Texas girl, would not be so proud.

Delaware and Vermont tie for the next spot, and are followed by New Jersey, Nevada, and Utah. Predictably, none of the southern states are on the list, likely because southern hospitality is a real thing and extends to our roadways.

The five states with the least rude drivers are North Dakota, which incidentally, has the highest number of truck or SUV related roadway fatalities, Maine, New Hampshire, Montana, and Minnesota. So if you're looking for a friendly roadway experience, you might consider moving either to the north or to New England.

But my favorite part of Insure.com's survey is undoubtedly the section where participants were asked to name the states where they thought the rudest drivers resided. Guess which states' residents threw the most shade? California. I guess that's one way to have state pride — hate on everyone else.

Californians deigned Arizona, Arkansas, Colorado, Nevada, New York, Oregon, Texas, Utah and even Vermont drivers unworthy of the road. Unfortunately for them, California actually ranked within the top 20 of the states with the rudest drivers, coming in at 17, above Arizona, Arkansas, Colorado, Oregon, and Texas. Looks like California should check itself before it wrecks itself.

While this ranking certainly doesn't dictate general quality of life in these various states, or even the safety of the roads, it's certainly something to keep in mind when planning your next road trip. Be prepared to deal with some major rudeness if you're looking to go through Idaho.

More like this
Michigan’s Governor Is “Going To Fight Like Hell” To Protect Abortion Access
By Andrea Zelinski
30 Expensive Mistakes You Don't Realize You're Making With Your Car
By Claire Epting
The Staircase Explores The Murder Trial That Ripped A Family Apart
By Gretchen Smail
David Rudolf, Michael Peterson’s Attorney In 'The Staircase,' Is Still Practicing
By Taylor Maple and Morgan Leigh Davies
Get Even More From Bustle — Sign Up For The Newsletter