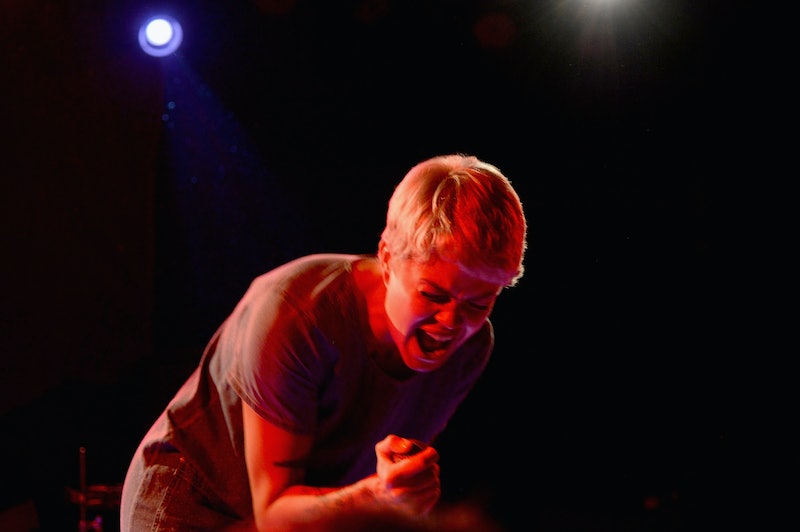 At shows, Meredith Graves is a concentrated force. She may be small, but the 27-year-old frontwoman for punk band Perfect Pussy creates a sound like a punch to the gut. And really, you couldn't expect any less gumption from the woman who pressed her own menstrual blood into a limited-edition Perfect Pussy record, which is why it's almost unsurprising that she made an even ballsier move at the Basilica Soundscape festival in New York.

Graves gave a spoken word piece about the effects of gender on performance and perception in music, weaving together a story about meeting Andrew W.K. with comparisons of Lana Del Rey and mixing in her own experiences of being a female-identified person who loves music. There are a lot of points in her piece that resonate, and if you get the chance you should read it in full over at The Talkhouse; Graves is a hell of a writer. But if you want the Cliff's Notes, here are some of the points Graves made that might just make you want to raise your fists in a resounding "hell yes" (or maybe just do that mentally, if you're at work):

On Being a Woman and Having Your Passion Be "Validated"

No matter what you're interested in, if you're a woman, you're constantly being tested on whether or not you're a "real" fan. Whether it's gaming or comic books or music, some men are constantly in awe or disbelief of the fact that you could even be interested in it. Sometimes, it's having your interests questioned outright; other times, men will turn your interest into some sort of spectacle, as if it were a huge feat that a woman could even take interest in this sort of thing. But it's a process that many women have experienced and Graves explains well, even articulating her own experiences of being "vetted" by men for her interest in music:

They’re the pretentious boys who, when they meet a girl who likes metal, only find it fair to insist she recite the Slayer discography in reverse chronological order. If she likes comic books, she has to know every character’s origin stories as well as subsequent changes and how they correspond to different decades and illustrators. The same boys who, a year later, when I was 15 years old, still on dial-up and not yet part of the world, scoffed when they found out I had never heard of a website called Pitchfork. They were 18 and I was just young and stupid, I clearly wasn't a real music fan. The ridicule and questioning were constant.

On Gender and Appearance

Forget about everything else: simply the physical toll of identifying as a woman is hard. It's makeup and bras and making sure your clothes aren't too matronly but aren't too slutty and worrying about stains and how greasy your hair is and being too fat but also being too skinny and talking too much but also staying too quiet. If you don't take care of these things, people notice. And not in a good way. It's a small passage in Graves' essay, but just her simple awe at how Andrew W.K. can present himself in public the way that he does and still be worshipped speaks volumes:

I feel weird about eating these days or leaving the house, or existing in a material form at all, because having a body that talks too much and sweats and makes mistakes is exhausting, and here’s this dude just standing around with dented hair and a Napalm Death shirt over sweatpants shorts and it’s almost as if the whole world isn't scrutinizing what’s in his cart at the grocery store, what he looks like without makeup on, how his gender affects his authenticity as a performer.

On Gender, Performance, and Authenticity

But the heart of Graves' piece lies in her comparison of Andrew W.K. and Lana Del Rey. Both are musicians whose art is not only music, but a performance of manufactured self. Both artists have publicly admitted that these personas are not of their own design, but one that was created from a collaboration with lawyers and music industry executives. One is a man. One is a woman. One is reviled, while the other is upheld as a genius. Guess which is which?

But when a female musician is in any way fake, she’s denied creative agency, written off as uninventive and talentless. Beyoncé is accused of lip-synching, even when she isn’t. Music rags run articles exposing pop stars’ real names, highlighting Lorde, Lady Gaga, Nicki Minaj, Miley Cyrus. But being that these are the most successful female artists in the world, one has to assume that their fakeness — or, as we should be calling it, “reinvention” — is necessary for women to succeed in the music industry. It’s the basic principle of survival, period: adapt and evolve, or die.

More like this
Graham Norton’s 10 Best Eurovision Zingers Will Leave You Howling
By El Hunt
How Reality TV Stars Conquered Your Bookshelves
By Anna Peele
We’ve Got A Text! 'Love Island' 2022 Finally Has A Release Date
By Sam Ramsden
Watch The Emotional Trailer For Dolly Alderton’s 'Everything I Know About Love'
By Bustle UK
Get Even More From Bustle — Sign Up For The Newsletter