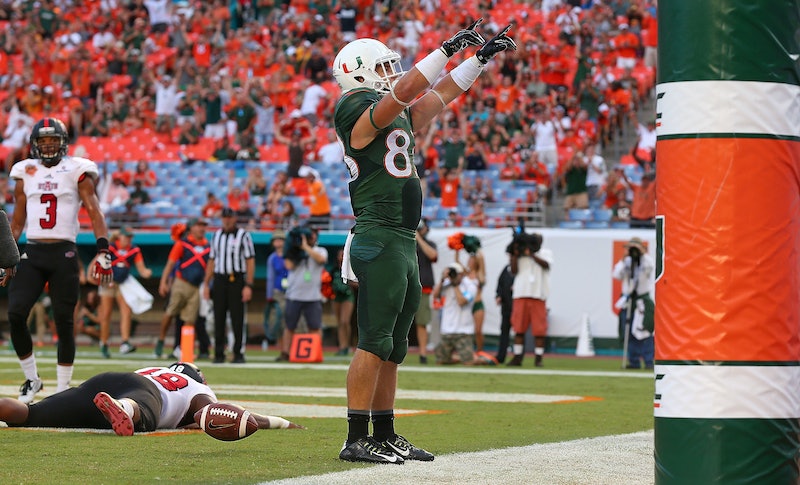 Well I guess it's called a trick play for a reason. Sometimes players have to do whatever it takes to deceive or distract the other team — whatever it takes. For one Arkansas State player, that meant faking his own death during a fake punt. Believe it or not, it's a real football technique called the Fainting Goat, and wide receiver Booker Mays executed it perfectly. But alas, Mays fainted in vain since the rest of the play was bungled.

The Arkansas State Red Wolves faced off against the Miami Hurricanes on Saturday at Miami's Sun Life Stadium. The strangest fake punt in history occurred in the second quarter, when the Hurricanes were up by 13 in a 20-7 lead. Sure, Arkansas was down by two possessions, not exactly a desirable position to be in for any team, but it was only the second quarter. What's the rush?

Apparently their coach Blake Anderson felt differently and approved the fake punt. Instead of going on fourth down to try and advance the five yards they needed to convert, Arkansas' Ryan Eustace snapped the ball to punter Luke Ferguson who, instead of punting, threw a pass downfield. Unfortunately, the trick play backfired as a Hurricane player intercepted the throw and gained possession of the ball at their own 31 yard line.

Coach Anderson explained the corpse-like move to USA Today's For the Win, admitting that "We were just having a little bit of fun to be honest with you." Since Mays was an ineligible receiver, meaning he couldn't advance downfield after the fake punt, Anderson thought it'd be a fun joke to have him faint. Though it wasn't a critical part of the play, Mays still practiced it all week — no wonder he looks so convincing when he goes down. Anderson goes on to explain:

Despite Mays' perfect execution, Ferguson underthrew the pass and blew the play. And Mays seemed to pay for it the most.

SB Nation also offers an explanation for why the Red Wolves employed the Fainting Goat. What Mays was apparently trying to achieve was a tackle-eligible play, which turns an offensive tackle into an eligible receiver. SB Nation explains:

The WR who falls over (Mays] is "covered" by the receiver below him on the line of scrimmage, making him an ineligible receiver. The WR going in motion uncovers the left tackle, allowing him to go downfield and receive the pass, which is the trick here.

Regardless of the explanations, the Fainting Goat technique will go down in history as one of the strangest things to have happened on a football field. Here it is again, just because (remember to look away once in a while, because it'd be easy to watch this all day long).

More like this
Michigan’s Governor Is “Going To Fight Like Hell” To Protect Abortion Access
By Andrea Zelinski
Chelsea Woody On Shattering Stereotypes In Surfing
By Leah Groth
What Is Jeanie Buss' Net Worth? The Lakers President Is Uber Rich
By Hugh McIntyre
Jake Daniels Just Became The UK’s First Active Football Player To Come Out As Gay Since 1990
By Sam Ramsden
Get Even More From Bustle — Sign Up For The Newsletter