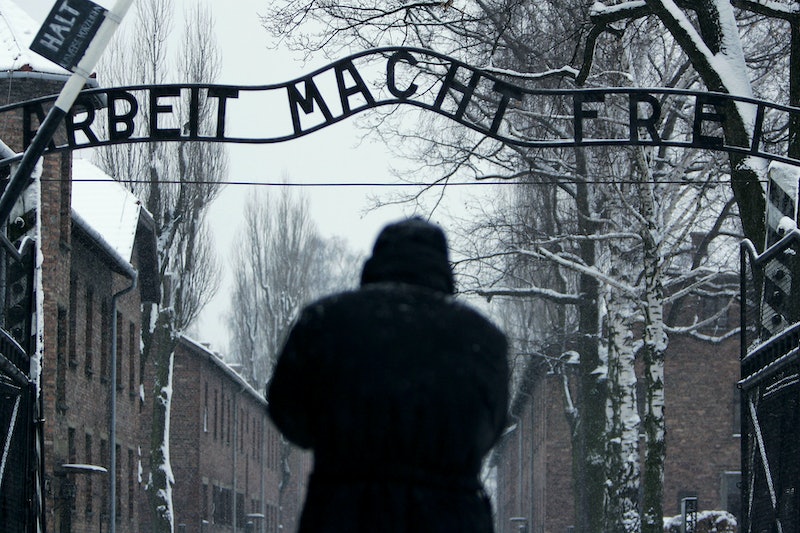 It's been nearly 70 years since the Holocaust, but charges are still being brought against players of the German Reich. On Tuesday, a 93-year-old Auschwitz guard, Oskar Groening, was charged with accessory to murder for his role in the Holocaust. And his charges are staggering — 300,000 counts for each death he allegedly aided.

According to NBC News, 93-year-old Oskar Groening worked as a Nazi guard in the notorious concentration camp responsible for more than one million deaths. Groening was stationed at the camp between May and July 1944, when at least 300,000 Jewish people deported from Hungary were murdered.

Although the charges allege Groening — who was just 21 years old when he arrived at Auschwitz — was an accomplice in the crimes committed against the camp's detainees, the former Nazi guard has denied any responsibility. As an SS guard, Groening said he monitored the incoming freight trains bringing prisoners to the camp and acted as a bookkeeper of the prisoners' stolen money. He'd witnessed horrific acts, including the camp's entire killing process, he said, but didn't commit any himself.

Unfortunately, it just happens to be the case that they took me, Oskar Gröning, to this camp where the things that everyone was cheering about were actually happening. And then, at some point you are there and the only thing left is the feeling: I am part of this necessary thing. A horrible thing -- but necessary.

Groening added that even while working as an Auschwitz guard, the murders being committed daily didn't immediately register with him:

[T]he horrific wasn't obvious. When you know that killing is going on, you also know that people are dying. The horrors only dawned on me when I heard the screams.

Over the years, Groening told the magazine that he had to repeatedly prove his innocence to people, including his family and in-laws. Now, as an elderly man who continues to ask God for forgiveness, he insisted to Der Spiegel that he wasn't a perpetrator or killer:

From the Christian standpoint, from the standpoint of the Ten Commandments, the commandment that says: Thou shalt not kill, being an accomplice is already a violation. But this raises another question: Did the things I did make me an accomplice to murder?

Groening is just one of nearly 50 former Auschwitz guards identified in a recent investigation of Holocaust perpetrators launched by the German government. In 2013, Germany charged its first former guard from the list of suspects — 93-year-old Hans Lipschis, who claims he worked as a cook at the concentration camp.

The Nazi investigations aren't just limited to Germany. Also in 2013, the U.S. government investigated a 94-year-old Minnesota man who immigrated from the Ukraine. The man, who's been living in the U.S. for 60 years, allegedly led an SS unit during World War II.

More like this
Where Is Dr. Cline Now?
By Morgan Leigh Davies
How To Fight For Reproductive Rights, Based On How Much Time You Have
By Courtney Young
9 Honestly Unbelievable Revelations From The WAGatha Christie Trial
By Frances Stewart
UK Viewers Will Have To Wait To See Jessica Biel’s Killer Housewife Series
By Rachel Mantock
Get Even More From Bustle — Sign Up For The Newsletter