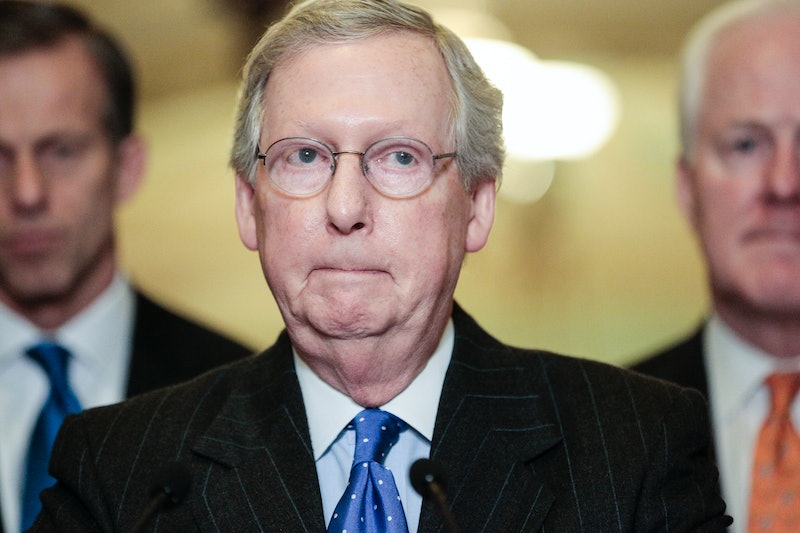 For the second time in the Senate — and the fourth time for the party in four years — Republicans have blocked the Paycheck Fairness Act, which would build federal framework to ensure equal pay for women. But the GOP, again, has a message straight from the heart: NOT TODAY, LADIES!

The Paycheck Fairness Act needed 60 votes to advance in the Senate, falling eight short with unanimous Republican opposition. The legislation would have tightened definitions for business-related justifications for women being paid less, banned paycheck secrecy, and closed several loopholes businesses currently have that allow them to pay women 77 cents to every $1 men get.

Democrats, who are clinging to the last scraps of hope of maintaining Senate majority come November, have laid into the GOP's refusal to pass the legislation, hoping to let women know how little Republicans are doing for their female constituencies. They don't really have to try that hard. No. 3 Senate Democrat Chuck Schumer told Politico:

Democrats offered Republicans a chance to right their wrong in blocking pay equity earlier this year but rather than reversing course, Republicans doubled down. Republicans have once again told women across the country that they don’t deserve a fair shot at earning equal pay for equal work.

The Republicans have been largely quiet on their rationale for rejecting the Paycheck Fairness Act this time around, instead focusing their efforts on making Democrats look bad. You see, those sneaky Dems are wasting precious time and resources on trying to champion unpass-able "messaging bills" that the Republicans already let them know that they have no intention of letting through (like the Paycheck Fairness Act)! I mean, imagine a day when equal pay had viable federal protections!

Meanwhile, the GOP allowed floor debate when it could have been blocked, likely in an effort to soak up debate time for other key issues to Democrats.

Does sound logic such as "equal pay for equal work" not resonate with you? Nope, not for Senate Minority Leader Mitch McConnell, either. But listen, ladies, slow down with the hysterics, OK? Calm your little lady brains. McConnell has some TOTALLY GOOD REASONS for fighting this tooth-and-nail, and it definitely has nothing to do with an internalized need to keep women a few notches under a man. Honey, I wish you wouldn't get so crazy like this.

Look, Mitch laid it out for you in April right before the last vote, which Republicans squashed without debate:

At a time when the Obama economy is already hurting women so much, this legislation would double down on job loss, all while lining the pockets of trial lawyers. In other words, it's just another Democratic idea that threatens to hurt the very people that it claims to help.

Oooooh, so we should be protecting businesses from lawsuits over women's right to fair pay? And this Obama economy is hurting me anyhow and Democrats must be in a complex plan to squash womankind? Gotcha!

Unfortunately, people of sound mind have agreed with McConnell's logic. Last May, there was a salvo of fumbling explanations for why we don't need equal pay protections, and that, ultimately, businesses would never take risks with women for fear of being sued.

So, what you should take from all of these earnest efforts to make sure you don't have federal protection for equal pay is not that your good ol' uncles in the GOP don't want you to get paid fairly. They just don't want to interfere with Big Business having to bend over backward and pay female employees equally! And they want to make sure that all of you little misandrists don't sneak your way to the top of corporation and ultimately doom the world to Amazonian rule.

Aren't we glad we cleared that up?