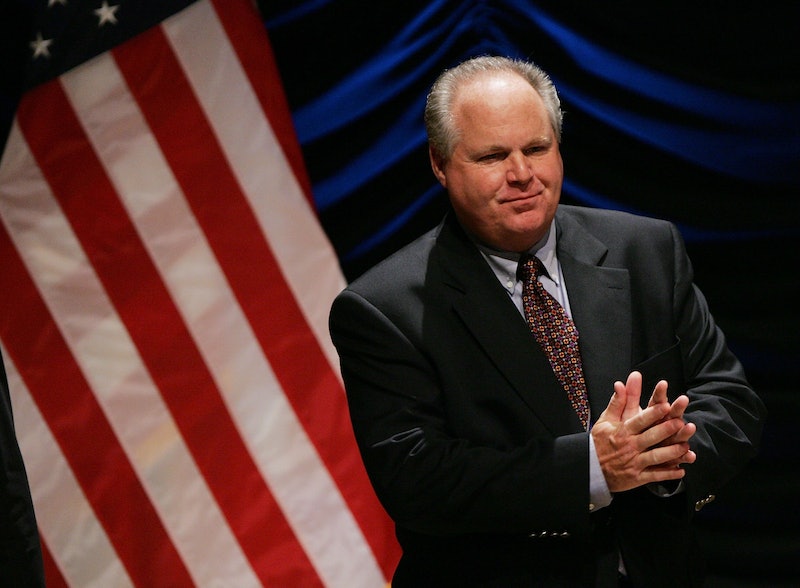 At this point, Rush Limbaugh's signature brand of hateful commentary is no longer shocking, just disgusting — and maybe we're reaching the final act of it. After a disturbing rant about Ohio State University's new affirmative consent policy designed to curb sexual assault, Democratic Congressional Committee Chairman Steve Israel is calling for radio stations to drop Limbaugh from the air. It's not the first campaign urging to blacklist Limbaugh, but we can only hope that this one will do the trick.

On Monday, Limbaugh, using his pathetic excuse for logical thought, argued against the sexual assault policy by saying that "no means yes if you know how to spot it" and affirmative agreement "takes all the romance out of everything." Let's not even begin to delve into the ridiculousness of those vile statements. While the most appropriate response is to roll your eyes, his asinine comments prompted a top politician to say "enough is enough."

On Tuesday, Rep. Israel to release the following statement:

There’s simply no excusing comments of this offensive nature, especially at a time where our country is having a long-overdue conversation about violence against women. Plain and simple — Rush Limbaugh is advocating for the tolerance of sexual assault and should be taken off the air immediately.

Limbaugh's comments come amid the NFL's investigation of a domestic violence case involving Ravens running back Ray Rice and less than a month after California passed the "yes means yes" law, which will translate to similar affirmative consent policies on the state's campuses.

But Limbaugh is not having any of this thing called progress and will take no part in it. In fact, he has made a career of being staunchly opposed to bettering the human race, whether it's denying women birth control or opposing efforts to control climate change, and the human race would be better off without his sordid commentary. But what are the chances that this latest "kick Limbaugh off the air" campaign will work? Here are three possible scenarios.

Radio Stations Are Used to the Controversy and Will Do Nothing

As I said, Limbaugh has made a career out of shocking people and creating controversy. And some of his shock value has waned. His latest comments may very well roll off the backs of the stations that air him. He is, after all, a cash cow for them, topping the list of the country's top talk radio shows at No. 1, according to Talkers magazine.

The Battle Is a Slow One, and Limbaugh Will Lose Stations a Few at a Time

However, not all radio stations have turned the other cheek in the past. Limbaugh's despicable comments about women's rights advocate Sandra Fluke in 2012, which prompted multiple petitions, including ones on change.org and the White House's We the People website, would forever tarnish his already questionable reputation. As a result, 140 companies stopped advertising on his show, which led to a significant revenue decline and prompted Cumulus Media to drop Limbaugh from its more than 40 stations the next year.

Perhaps a slow demise for Limbaugh is the most realistic scenario.

Radio Stations Will Reach a Tipping Point and Collectively Ban Him

Of course, this would be the best-case scenario, but it's probably not likely. The Rush Limbaugh Show is broadcast on over 600 radio stations nationwide. The best way to fully blacklist Limbaugh is to convince Clear Channel, now iHeartMedia, which owns a significant number of the stations that air him, to pull the plug. However, petitions aimed at the media company have been unsuccessful.