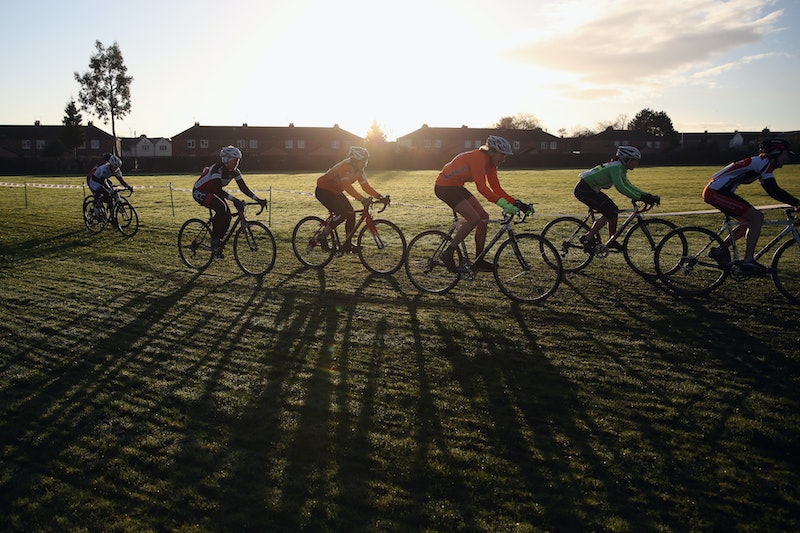 Italy's Tour of Tuscany is hardly New York Fashion Week. While the form-smothering Lycra uniforms paraded around at the international cycling festival may be aerodynamic, they are deliciously unfashionable. But the new, flesh-colored uniforms for the women's Colombian cycling teams are just downright... insane. I don't think anyone has been this confused about the cycling world since Lance Armstrong.

Bogota Humana, a Colombian team sponsored by the city of Bogota and endorsed by the Colombian sports ministry, unveiled their new cycling kits over the weekend to the outrage of the cycling community and, most importantly, the Internet. The top looks normal enough, with a red base punctuated by white and yellow, with the typical team sponsors listed. The shocking part is the crotch and midriff region, which is a nude-colored panel that makes riders look unmistakably naked. The kits were so convincing that tweeted images were flagged with this warning: "The following media may contain sensitive material."

Brian Cookson, president of the Union Cycliste Internationale (UCI), tweeted his disapproval of the, erm, interesting fashion statement, indicating that UCI will be taking further action against the Colombian team.

To the many who have raised the issue of a certain women's team kit, we are on the case. It is unacceptable by any standard of decency.

Alright, super bad fashion choice, but was it sexist? The Internet erupted in a flurry of accusations about the certainly provocative kits, but little details have emerged on who chose the uniforms, or more importantly, why.

It's hard to believe that someone wouldn't have understood how that would look. And by hard to understand, I mean damned near impossible, but it has happened before. In 2010, the men's cycling team Footon-Servetto-Fuji, made up of riders from all over the world, had uniforms that their designer called black and gold. Trust me, they were not.

These are not, as has been reported elsewhere, the Colombian men's cycling kits for this year. But man, would that have been good! Sexist or not? We're not sure. But we do know that the cycling kit design industry may need some fresh blood.