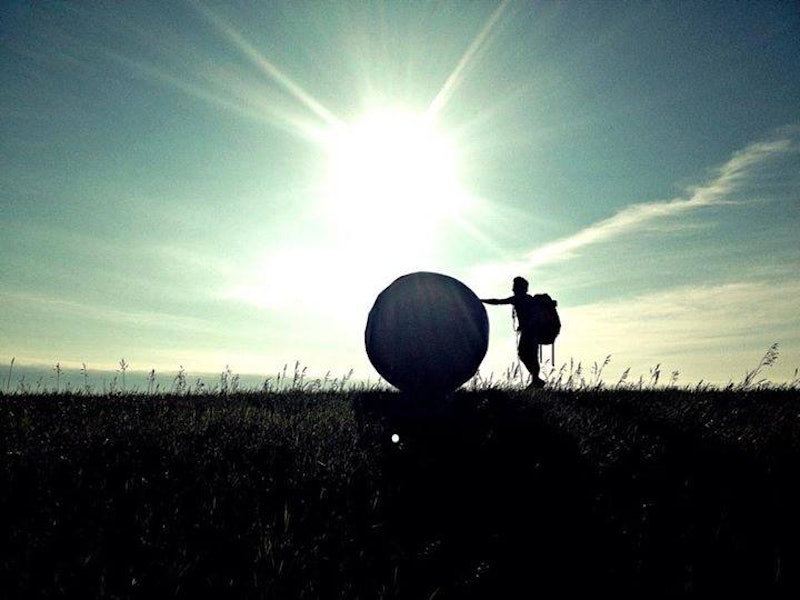 It takes balls to battle cancer, and this guy has a big one. Before your dirty mind goes any further, we're talking about Thomas Cantley, who's pushing a giant inflatable ball across the country in order to raise awareness for testicular cancer. By taking his ball out, Cantley's campaign, Be Ballsy, encourages men to take theirs out to get checked.

Cantley was diagnosed in 2009 with stage 3 testicular cancer, the last stage of the disease, but beat the odds and has now been in remission for the past four years. Cantley realized that he could have avoided the late-stage diagnosis if he had known to look for early symptoms, and realized other men were probably in the same boat. The disease is highly treatable if detected early, and since testicular cancer is the most common cancer among men ages 15 to 35, more awareness is clearly needed.

Cantley writes on his fundraising page, which was launched in partnership with the Testicular Cancer Foundation:

I came to realize that young men do not have an organization that educates them, that helps them recognize the signs that their health may be at risk.

So now he's on a mission to change that, raising money for the foundation to promote education about early detection. In addition to the online fundraiser, Cantley is pushing a 6-foot, flesh-colored, inflatable ball from California to New York to spread his message. He's encountered a ton of supporters along the way, who have snapped shots with Cantley's giant ball, aptly named Lefty, with the hashtag #BeBallsy on Instagram and Twitter. Cantley even lets them get up close and personal with his ball, writing encouraging words all over it.

These strangers have also helped Cantley on his journey by offering food and putting him up in hotel rooms. The one thing he refuses, however, is money, separating the journey from the actual fundraiser.

Even though it's filled with air, it looks exhausting pushing that thing cross-country.

I bet the carnies were impressed with the Man With the Giant Ball.

The sun sets, but the push continues.

I wonder if the ball gets its own hotel room.

Just walkin' across America with my dog and my giant ball.

Oh, by the way, this is Thomas:

And here are some of the supporters he's met along the way:

And all of their words of encouragement.

More like this
An Honest Review Of The TikTok-Famous WalkingPad
By Kaitlyn Wylde
5 Crystals To Lower Your Anxiety
By Megan McCarty
5 Crystals To Manifest Better Sleep
By Megan McCarty
What Does “Gatekeeping” Mean On TikTok? The Viral Term, Explained.
By Courtney Young
Get Even More From Bustle — Sign Up For The Newsletter