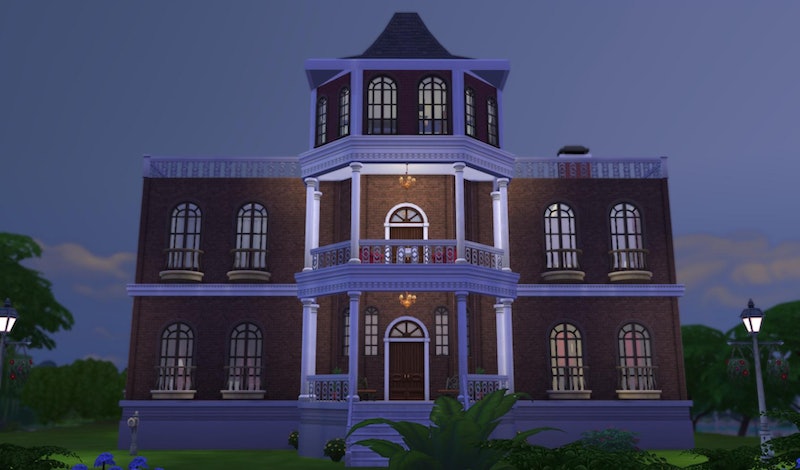 Hey, remember Clue? The classic family board game — whose disturbing idea was that, anyway? — has been adapted into everything from creepy "murder mystery" parties to a cult 80s movie and a 90s video game, and even received a modern upgrade starring child stars and tabloid-hungry actresses (yes, really). Now, the board game's gotten the virtual reality treatment: Clue's "Boddy Mansion" was re-enacted using The Sims 4 by a YouTube user named "PushingUpRoses," with help from a Redditor called "raiderofawesome."

A trip down memory lane: The mansion in Clue, named "Boddy Mansion" after its murdered owner, Mr. Boddy — weirdly, outside of North America, it's Black Mansion, after the ill-fated Mr. Black — features nine extravagant rooms. The murder of Boddy takes place in one of them. So you've got your library, a conservatory, a "billiard room," a ballroom (because it's not just Disney princes who have ballrooms in their family homes, dontcha know) and so on. One of them is the last place Boddy ever sees.

How, you ask? Um, through the use (well, abuse) of one of these inventive murder weapons: a candlestick, lead pipe, knife, gun, rope, or spanner.

Seriously. Exactly half of these items involve poor Boddy being bludgeoned to death, and this is a family game. Anyway, I digress. Redditor and Sims maverick "PushingUpRoses" included a helpful side-by-side comparison of their design versus the original board game.

In the walkthrough video, "PushingUpRoses" explains she's a Clue fanatic — the movie, the board game, everything. "I love it so much that I made you this mansion," she explains.

"It's very specific to the 1972 version of Clue, because I am that dorky," she goes on, referring to the original game. I love her.

By night, it's even creepier.

Murderous intent in the kitchen, if ever I saw it. (FYI: That's an urn in the corner.)

Who would murder in this kitchen? Look at how clean and shiny it is!

OHMYGOD SAMARA, IS THAT YOU?

Oh, good! Another hall, this time a throwback to The Shining.

The study, with its blood-red walls.

Creepy, creepy library, also complete with red walls. Sure, I get the symbolism (or at least I think I do — red like blood, yeah?), but I am forever grateful this place doesn't exist outside of The Sims.

The conservatory, which looks a hella lot cheerier than that hall.

Hey, a ballroom! The wannabe Disney princess in me has found her spiritual home.

Waiiit. Is this the site of a murder... or a frat house?

Can't you just imagine those angry Sims ghosts (who haunted my Sims home in their droves, probably because I left them in the pool until the Grim Reaper showed) floating around in here?

OK. I would most definitely say no to living here.