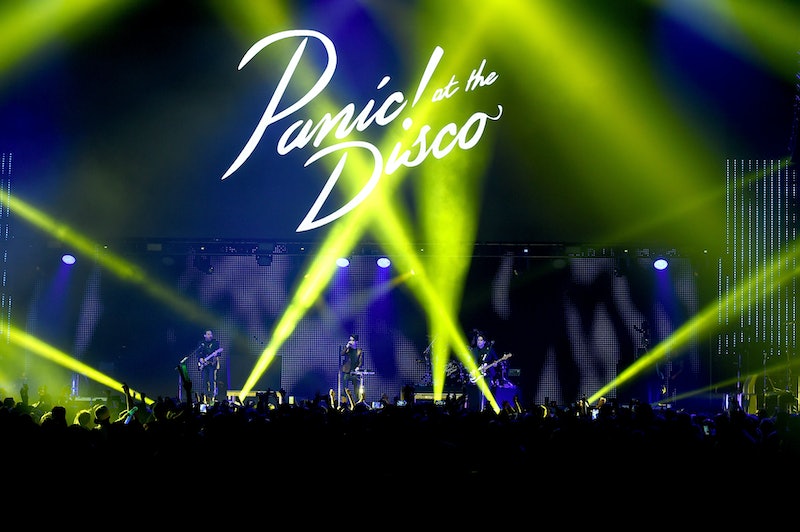 Look, I'll be the first to admit that I wasn't the coolest person in middle school, but even I knew Panic! At The Disco was a cool band to know and listen to while wearing heavy eyeliner and scrunched hair. I was more of an old school music gal, the music I listened to was whatever music my parents listened to, which included almost only Queen. Seriously, in 6th grade, I wrote in my yearbook "About Me" that my favorite song was "Bicycle Race" by the famous band. So when I found out that Panic! At The Disco had covered Queen's "Bohemian Rhapsody" on a recent concert tour, I felt like my entire childhood was coming back to haunt me.

But the resurgence of my youth wasn't as traumatizing as it could have been. In fact, Panic! At The Disco's cover of everyone's favorite "look I know every word to this 6 minute song" drunk karaoke song — and also a music classic — is pretty awesome. I know what most people are thinking, "No one can ever do 'Bohemian Rhapsody' as great as the originals," to which I respond, "Duh," but that's not the point. Panic! At The Disco's version of the song is a perfect homage to how great Queen performed the song. Take a look:

Here's why this cover is awesome:

There is nothing worse than a cover of a song that isn't done full out. You can stand by Queen all you want, but there is no denying that Panic! At The Disco didn't put a lot of work into this video/ version of the song.

It's just different enough from the original

Panic! At The Disco's version has very small touches that make the song not a complete rip off of the original, because we all hate when people do "Bohemian Rhapsody" ripoff covers right? (Note: "Bohemian Rhapsody" is a song worth being so protective over)

But all the best parts are still there

The falsetto, the instrumentals, the crescendos (thank you middle school music class), those moments in the original that we all love and get really excited about — you know what I'm talking about, we all have a "magnificoooo" key that we have assigned ourselves — it's all there in Panic!'s version.

It's just a great song

Look, any excuse to listen to "Bohemian Rhapsody" should be a valid reason. So just listen to it. I don't think you'll regret it.