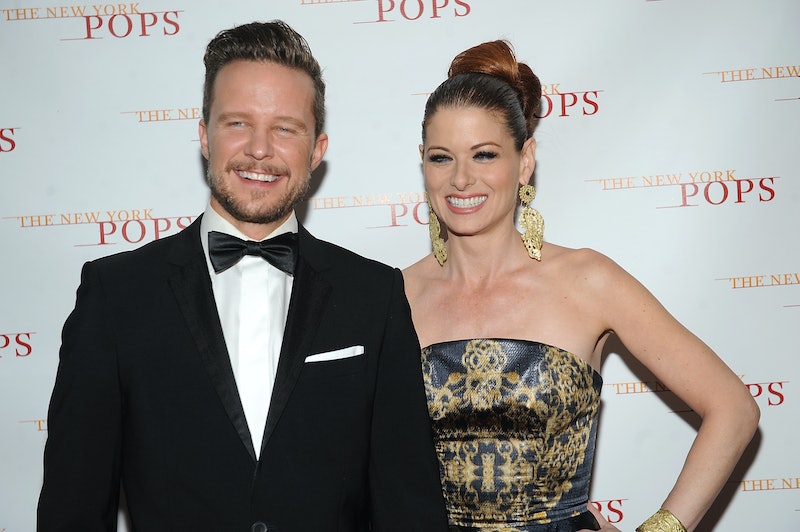 While most people recognize TV actress Debra Messing, now star of The Mysteries of Laura, from her Emmy-winning performance as Grace of Will & Grace, I have to admit something dark and somewhat embarrassing — I was a big fan of NBC's unmitigated disaster Smash. Yes, every brightly patterned scarf or hastily written song was awaited week by week by me, perhaps Earth's only fan of both original Broadway musical numbers and watching Jack Davenport from the Pirates of the Caribbean series deliver poorly written bon mots. And those of us who followed Smash got the shock of our lives when television imitated life and Messing began dating her costar Will Chase, shortly after announcing she and her husband of 10 years Daniel Zelman were separated.

On Smash, Chase played her former flame turned clandestine affair. In real life, however, Messing claims she had been separated from her husband since 2011 (but was still living with him despite being estranged), and wasn't publicly seen with Chase until 2012, so it wasn't quite as scandalous. While in Smash, Messing's character Julia Houston broke things off with Chase's character, an actor who actually managed to give a surprisingly great performance as Joe DiMaggio for her Marilyn Monroe musical, Messing and Chase are still together.

Even once Chase left the show, I sat through all of Bombshell and that whole other musical clearly based on Rent. So yes, I am familiar with Messing's work — and am happy she'll be back at NBC working on The Mysteries of Laura, a hybrid cop drama and family drama where it looks like she'll only be wearing patterned loungewear when seasonally appropriate. And while the title of the show is almost as bad as Smash, hopefully it'll be a better use of Messing's talents.

Messing and Chase are frequent red carpet attendees, and for whatever reason, are favorites of online reviewers, who love to make references about the origins of their relationship. For example, Broadway World's review of Nashville that describes Chase as "But every love triangle needs a third...enter country superstar Luke Wheeler (played by Broadway, SMASH, and Debra Messing fave Will Chase)." Yep, right now, while Messing is working on Laura, Chase is starring on Nashville, playing a Tim McGraw-type named Luke Wheeler, who just got engaged to Connie Britton's Rayna James at the end of last season.

It's always juicy when two costars get together, but Chase and Messing seem pretty committed to making their relationship as normal as possible, even though Laura shoots in New York and Nashville shoots in… well, Nashville. And though Messing is keeping her romantic entanglements pretty private, from what we do know of the two, they seem very happy together.