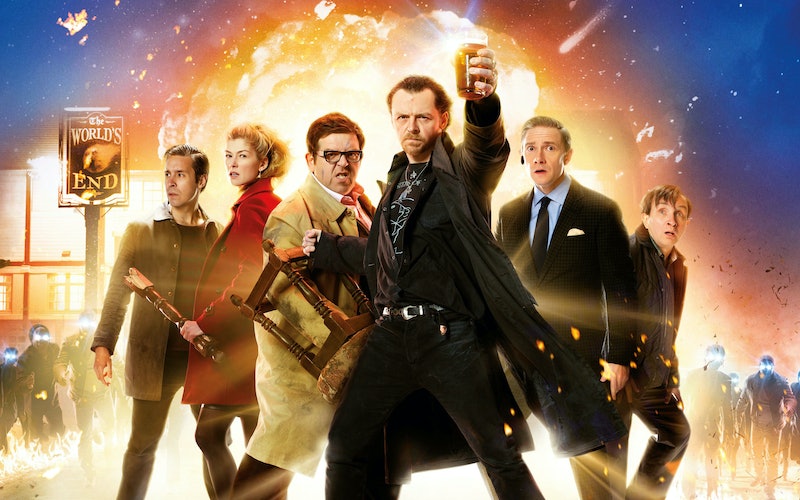 If you've never heard of The World's End, it's OK. You're forgiven, but it's time you get in on the fun. Here's the deal: The World's End is the third movie in the British science-fiction comedy trilogy that began in 2004 with Shaun of the Dead, and continued in 2007 with Hot Fuzz. Starring the hilarious Simon Pegg and Nick Frost, the third installment in the apocalyptic comedy series follows hometown friends as they try to a complete a pub crawl during an alien invasion. Haven't seen the first two movies? Not a problem. They're only related through a reoccurring Cornetto ice cream cone, which is really neither here nor there.

Anyway, there are many reason's why Pegg's presence alone should convince you to see the movie, but Twitter is also doing its damnedest to get you into the theaters this Friday. So is Rotten Tomatoes. So far, The World's End is sitting at an incredible 95 percent. Even Fox News loved it, saying: "The world doesn't end with a whimper, but with ingenious laughter, making this off-the-chart genre-bending comedy the funniest and most original movie of the summer."

Still not sure? Here's what other's are saying:

The Editor-in-Chief of RogerEbert.com says:

She's from Community and Mad Men:

Bill Paxton loves it, too:

If that doesn't get you to check it out, maybe this will ...

More like this
You Can Finally Stream 'Ticket To Paradise' At Home
By Chloe Foussianes
Yes, That's Lindsay Lohan's Sister Singing In The 'Falling For Christmas' Movie
By Radhika Menon
Keke Palmer Paid Tribute To "Other Half" Darius Daulton After Announcing Pregnancy
By Jake Viswanath
'The Holiday' Director Just Addressed *Those* Sequel Rumours
By Sam Ramsden
Get Even More From Bustle — Sign Up For The Newsletter