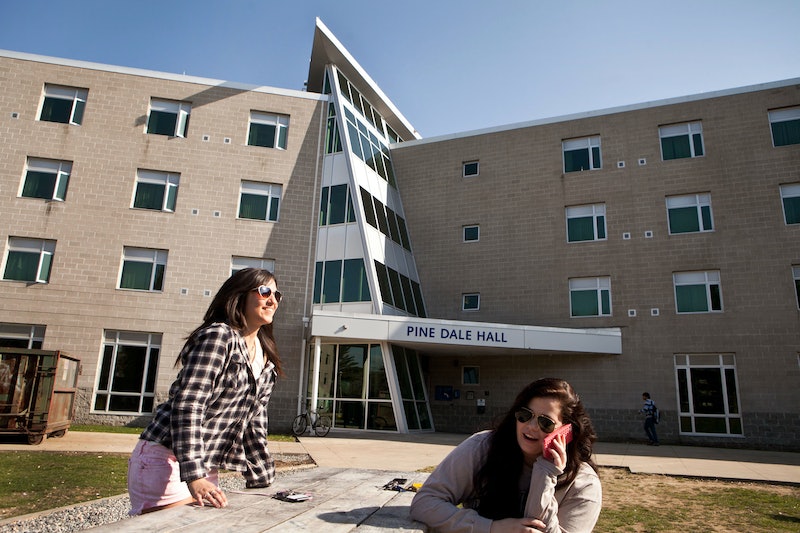 I feel like I should preface this whole thing by saying that, while I gently poke fun at the following items, I am an no way writing this from a high horse. I’m writing this from the opposite of a high horse. Like, if you dug a 25-foot hole, and put a saddled horse in that hole, I would climb down, sit on that horse, and commence to share this list with you from below the earth, which is a position most fitting for the degree of superiority I do not have in this area. That is to say, I was guilty of having most of these things in my college dorm room. In fact, most of these photos are from my own dorm days.

It’s interesting how little has changed in the near decade since I entered college (that was literally painful to type. I am old now. Prepare to mourn me, friends, as I am rapidly hurtling toward death.) It’s even more interesting to look back further and realize that the decorative choices we made back then were a very subtle departure from the same shit that generations before us adorned their dorms with.

Maybe it’s because our experiences, while varying greatly within the specifics, were generally the same – we were simultaneously dragging around the past for a sense of stability and identity amid a landslide of change, and dreaming ceaselessly of the future, which we had no reason yet to believe would be anything other than the perfect manifestation of every fantasy we had burdened it with.

In other words, we had no idea who we were, were bullshitting ourselves about how great we would become, and were getting drunk and naked without parents around for the first time. And that’s exactly what college kids have always done, and will always do. As such, you will likely always find the following items in a dorm room:

There’s a shift that happens sometime in between college and your 30s when you go from wanting to broadcast the massive quantity of alcohol you consume to doing everything you can to downplay it. By 28, you’ll be swearing (and lying) that you definitely do not drink a bottle of wine by yourself at home most nights. But in college, you spend a great deal of time brag-bitching (where you complain but mostly just to show off about the thing you’re complaining about) about your killer hangovers – and, of course, you’ll save and display every liquor bottle on a shelf in your dorm room/apartment. Bonus points if you put flowers or incense sticks in them.

That poster of two girls kissing

This, clearly, is not that poster. I don't think I have the rights to use that. This, as a substitute, is my friend Maddy and I kissing after getting real, real drunk freshman year. Because that's the shit you do when you're a freshman. That poster though – It will never go away. I mean, it’s hot. I get it.

Someone who claims to “only smoke when they drink”

A fun thing about saying that is that it can still be true even if you smoke every day. People who say this are usually girls in college who are either pretending to smoke because they think it makes them look cool (…hon.) or they are closet Real Smokers who are too ashamed to own it.

Or Pink Floyd, The Doors, Bob Dylan, Ani DiFranco, Jimi Hendrix, Bob Marley, or all of the above.

You had half-hearted plans to turn into Michelle Branch, but mostly it just sat around in case some dude with a case of the John Mayers decided to show up with some shitty weed and awkwardly pluck "Stairway To Heaven".

As college moves on, this shrine to They Who Shall Never Be Forgotten will come to include your new friends, like a visual representation of the social shifting in your life.

I feel like college fashion was established based on what was trendy for middle-class teens in 2001. It locked in and has yet to change very much.

Christmas lights all year round

College kids lose their total shit for Christmas lights. I don’t fully understand it, despite having fallen victim to their twinkly allure myself back in the day (okay, a year ago. Whatever. I’m not here for your judgment.)

It is physically impossible for a college student to walk past a photo booth without entering it and wasting the rest of the cash they have on them. These photo strips will be taped up on their wall before morning.

Some will claim to be “really into *insert name of whichever Eastern religious or spiritual philosophy they (probably wrongly) think mandalas are associated with*”. Some will just admit they think it looks cool. Still others find it to be a very fitting companion piece to...

“Everything was beautiful and nothing hurt.” (I just rolled my eyes so hard, I literally gave myself a headache.)

Maybe it’s a pillow that says “Dream” (don’t tell me what to do!), or a framed poster directing you to keep calm and do another thing after that, or a picture of a scandalously-clad person you would like to do sex to. It could be any of these things. Dorm rooms are the Target-styled, cinderblock incubators of all that is pure, hopeful, and blissfully ego-centric about the future.